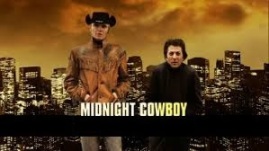 I figured since I watched a film that had an Oscar winner in it yesterday, I would do the same for today. The film I chose for today, Midnight Cowboy, won Best Picture, Best Director, and Best Adapted Screenplay in the 1970 Oscars. The film stars Jon Voight (Mission: Impossible) as Texan Joe Buck and Dustin Hoffman (The Graduate) as New Yorker Ratso. For Joe Buck, he has this idea that he’s too big in the hustling game for Texas and so he decides to move to New York to better his hustling game. For Ratso, things can’t get any worse for this New Yorker and he’s had enough of the big city so all he wants to do is move to Florida. Together, the two of them will form a very unlikely bond as they try to survive the streets of New York. The film also stars Sylvia Miles (Wall Street) as Cass, John McGiver (Breakfast At Tiffany’s) as O’Daniel, Brenda Vaccaro (Zorro: The Gay Blade) as Shirley, Jennifer Salt (American Horror Story) as Annie, Barnard Hughes (TRON) as Towny, Viva (The Man Without A Face) as Gretel McAlbertson, and the film was directed by John Schlesinger (The Falcon And The Snowman). 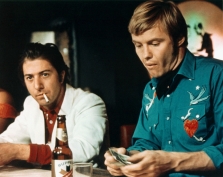 The first thing that should sell you on the film is the fact that Dustin Hoffman and Jon Voight star in the film. The second thing about this film that should sell you is that for 1969, it definitely pushed the boundaries of what was seen on film. Jon Voight has a sexual act performed on him by a man in the film and is the most unluckiest hustler or the worst. Both Voight and Hoffman lost the Oscar for Best Leading Actor to the duke John Wayne even though they deserved it after watching this. Dustin Hoffman has one of the best performances I have seen in a long time and his transformation was Oscar worthy. First of all, he sells that he’s this low down in the dumps New Yorker and he looks like he hasn’t showered in months. What more could you possibly want from the man? We are always led to believe that is what you have to do if you want to win an Oscar. Meanwhile, Jon Voight plays this clean cut cowboy in the big city who is a little naive because he’s not used to the hustle and bustle of the big city. I am not going to give away the ending of the film, but it’s kind of sad and bittersweet. I totally didn’t see it coming, but that is what I loved about it too. The film is gritty and it features a cool segment where they are at a Warhol party. This is classic cinema at it’s best and definitely a film worth watching if you are trying to be a cinephile. I am going to give the film an A for a final grade.