I was looking for something to watch today and I saw that Epix Drive In was having an 80’s takeover weekend. So out of all the movies they were showing today and tonight, She’s Having A Baby is the only one I hadn’t seen. The film stars Kevin Bacon (Footloose) and Elizabeth McGovern (Kick-Ass) as newlyweds Jake and Kristy Briggs. You see everyone in the world thinks that Jake and Kristy have no idea what they are getting into when the two got married and to be honest I don’t believe that they fully knew. Even though they might be unprepared for what lies ahead of them, they will do their best to tackle whatever it is including the decision to have a baby. The film also stars Alec Baldwin (The Hunt For Red October) as Davis, James Ray (The Edge Of Night) as Mr. Briggs, Holland Taylor (Two And The Half Men) as Mrs. Briggs, William Windom (To Kill A Mockingbird) as Mr. Bainbridge, Paul Gleason (The Breakfast Club) as Howard, Dennis Dugan (Problem Child) as Bill, Edie McClurg (Ferris Bueller’s Day Off) as Lynn, John Ashton (Beverly Hills Cop) as Ken, Larry Hankin (Home Alone) as Hank, and the film was written, directed, and produced by John Hughes (The Breakfast Club). 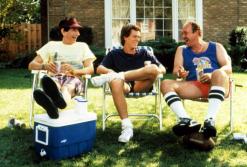 At first I had a hard time trying to figure out the plot of the film in accordance to what I should write as a synopsis above. The plot is as plain as day if you truly think about it because it’s all about whether we make the right choices or not. There are temptations in the world that makes us question the choices we made especially when it has to do with marriage. That is what both Kevin Bacon and Elizabeth McGovern’s characters face in the film as they get adjusted to each other and the life that follows. You can definitely tell when you are watching the film that it’s a John Hughes film because it has his name written all over it from the writing and the shots. Plus there is always this lesson that our main character learns in every film and Kevin has that lesson as well. Alec Baldwin lookss so young in this film, it’s crazy to see what he looks like now compared to then, but he was masterful in the film. If I were you guys I would stick around for the end credits as you gets some special appearances from actors like John Candy, Kirstie Alley, Ted Danson, Woody Harrelson, Dyan Cannon, Matthew Broderick, Dan Aykroyd, and so many more. If you are a fan of Kevin Bacon or even Kevin Bacon 80’s films, then give this one a look cause you never know you may enjoy this film. That is why I am going to give the film an B for a final grade.