I wanted to do something different for today as far as the type of movie I watched and it has been a while since I watched anything old. Slapstick comedy is one of the oldest forms of comedy that when done right can be really be funny and Buster Keaton (The General) was a master of it. That is why I chose to watch his last independent film in Steamboat Bill, Jr. For William “Steamboat Bill” Canfield (Ernest Torrence) the steamboat business has been good to him for many years, but there’s anew threat in town when the very wealthy JJ King (Tom McGuire) starts a steamboat business. One day, Bill receives a telegram from his son William Jr. (Keaton) is coming to see him all the way from Boston, but when he arrives he may not be everything his father expected. Will his dad be right or will Bill ed up proving him wrong? The film also stars Tom Lewis (The Great White Way) as Tom Carter- First and Last Mate, Marion Byron (A Pair Of Tights) as Kitty King- King’s Daughter, James T. Mack (The Cruise Of The Jasper B) as the Minister, and the film was directed by Charles Reisner (The Hollywood Revue of 1929). 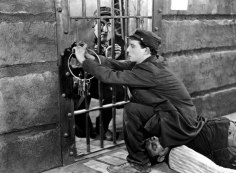 Buster Keaton was the very best at what he did whether it was directing (he was a co-director for this film) or acting in his films. It’s unbelievable to think that he was financing his own films, but unfortunately they cost too much to make for him to continue (Box office returns were bad). One of the best scenes in the film is towards the very end and it’s the cyclone scene. According to some research, he brought in some giant fans to help create the effect of a cyclone in a town that he had built especially for this film that comes tumbling down. It was definitely one of the most incredible sequences for a silent film in 1928. Not just that is incredible, but he also had no stuntmen and he used no trick shots during the film in the scene when the house comes down and he escapes unharmed because of an attic window. Buster Keaton was slapstick comedy and he proves in this film as his character can’t seem to do anything right as he runs into absolutely everything. Some of my favorite scenes are like the ones where he wakes up and the hospital has blown away so he gets out of the bed only to return as the bed gets blown away with him in it. Did I mention that this was a silent film? It’s one of those that I feel is easier to get through because it’s all about the acting. If the acting is bad then the film is a total failure. That was definitely not the case with this one. Give it a shot, you may surprise yourself. I am going to give the film an A- for a final grade.