There are always films that get announced or you see some details and it gets you excited for it, but you end up waiting for it for a while. That was the case with today’s film Cooties which I had heard about back in 2014, but we finally have it here for you. Cooties follows aspiring writer and now substitute teacher Clint (Elijah Wood) as he returns home to Fort Chicken to teach at the elementary school. The only problem for Clint is that when he gets to school, a virus begins to spread that turns the children there into flesh eating zombies. Now Clint has to lead a group of ragtag teachers to safety before they are torn to shreds by the infected students. The film also stars Rainn Wilson (House Of 1000 Corpses) as Wade, Alison Pill (Scott Pilgrim Vs The World) as Lucy, Jack McBrayer (The Increasingly Poor Decisions of Todd Margaret) as Tracy, Leigh Whannell (Insidious: Chapter 2) as Doug, Nasim Pedrad (Saturday Night Live) as Rebekkah, Ian Brennan (Scream Queens) as Vice Principal Simms, Jorge Garcia (The Ridiculous 6) as Rick, Cooper Roth (The Road Within) as Patriot, Morgan Lily (X-Men: First Class) as Tamra, and the film was directed by Jonathan Milott and Cary Murnion. 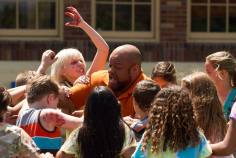 At first before I watched the film I questioned why this never made it into theaters before it went straight to DVD. Then after watching the film, I can definitely figure out why it never made it and I am not saying that as a bad thing. This is definitely one of those films that is so bad that it’s awesome. I just figured that having Rainn Wilson, Elijah Wood, and Jack McBrayer would be enough to get into theaters, but it’s really funny regardless. One of the elements I loved about this film was the little quips that are thrown like a reference to The Lord Of The Rings series that Elijah Wood starred in at one time. It also helps that Rainn Wilson is absolutely hilarious and Leigh Whannell’s character was weird, but a very funny addition to the ensemble. I really believe that without all those factors I listed, this film would’t be as good or enjoyable to watch. One thing it will do is make you not want to eat chicken nuggets ever again as you see how they are made and what goes into them. One of the things I also liked about the film was how creative they were when you see one kid using intestines as jump rope or a human head on the end of a rope that is used for tetherball. It was those little things that made the film enoyable to watch, but it’s still a little cheesy at times. With that being said, I am going to give the film an B- for a final grade.

For today’s film, I decided to check out a film that you wouldn’t expect from Adam Sandler and that is a western movie by the name of The Ridiculous 6. The Ridiculous 6 can be considered one of the major Netflix Original releases due to it’s attachment to Sandler who wrote the film. The film also stars Sandler as Tommy a.k.a. White Knife, a boy that was adopted by an Apache chief after his mother was killed. One day, a man shows up claiming to be Sandler’s real dad in an outlaw named Fran Stockburn (Nick Nolte). Frank tells Tommy about some buried money, but when he does that an outlaw named Cicero (Danny Trejo) shows up and kidnaps him. Tommy vows to rescue his dad by getting 50,000 dollars, but he meets five other men who end up being related to him. Together, they will go on a journey to rescue their dad as they become dubbed The Ridiculous 6. The film also stars Terry Crews (The Longest Yard) as Chico, Jorge Garcia (Lost) as Herm, Taylor Lautner (Twilight) as Little Pete, Rob Schneider (Deuce Bigelow: Male Gigolo) as Ramon, Luke Wilson (Old School) as Danny, Will Forte (The Lego Movie) as Will Patch, Steve Zahn (National Security) as Clem, Harvey Keitel (From Dusk Till Dawn) as Smiley, Jon Lovitz (Big) as Ezekiel Grant, Whitney Cummings (Whitney) as Susannah, and the film was directed by Frank Coraci (The Waterboy).

The film features so many comedy greats that it was just too much to list in the above paragraph. I was a little skeptical about the film as to whether it would be a spoof film or a comedy. Do not be afraid of the fact that it says that it’s a western because this film is absolutely hilarious. It actually brings you to a time when Adam Sandler films were actually funny. A lot of his films are hot or miss, but this is a definite hit and it has a lot to do with his supporting cast. Taylor Lautner makes you forget that he starred in all of those awful Twilight movies because the man is absolutely hilarious as the idiot savant Little Pete. There is a lot of slapstick comedy to go along with some dirty humor and everything in between. One of my other favorite moments of the film always came with Rob Schneider and his donkey who has a bit of a problem known as extreme explosive diarrhea. I think as long as Sandler can write and produce films like this one, then he’ll be alright. I see Vanilla Ice is part of his crew and it’s always nice to see David Spade working. You should definitely check this film out on Netflix for yourselves as the film broke records for Netflix. Plus this is film one of four for Sandler who signed a four picture deal with Netflix. I am giving the film an A- for a final grade.