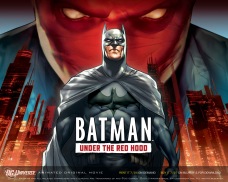 For today’s film, I was specifically in the mood to see an animated film, but I was more in the mood for a Batman animated film especially considering we are getting The Killing Joke soon. There are so many I need to catch up on so I decided to check out Batman: Under The Red Hood for today. Things in Gotham City are pretty much the same since the death of Jason Todd (Robin) by the hands of The Joker (John DiMaggio) five years before and Batman (Bruce Greenwood) is still living with the guilt. That is until one day when a mysterious figure know simply as the Red Hood (Jensen Ackles) shows up and starts taking over the crime syndicate in Gotham. Even though Batman and Nightwing (Neil Patrick Harris) are hit on his tail, they can’t seem to catch him, but Batman feels that there is something familiar about him. So, while he is on a mission to stop him, Batman is also out looking for the truth before he gets to the Black Mask (Wade Williams). The film also stars Jason Isaacs (Harry Potter And The Goblet Of Fire) as Ra’s al Ghul, Carlos Alazraqui (Toy Story 3) as Chi Chi, Gary Cole (Office Space) as Commissioner Gordon, Kelly Hu (X-Men 2) as Ms. Li, and the film was directed by Brandon Vietti (Superman/Doomsday). 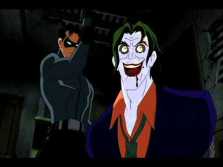 One thing that I will say before we dive in too deep into the film is that I am huge fan of the Batman animated films. They are some of the best written and done films, but that’s because you can do a lot more with animation. That is definitely the case with this film which was well written and well done. If you are not familiar with the Red Hood story then definitely check this one out because it’s a very cool story. I am going to try and not give too much away because I hate spoiling movies. One of the things I loved about this film is the fact that the Red Hood believes he’s doing the same as Batman, but by killing off the villains that is the way you control crime. It gets really deep from there and it gets very personal for Batman who know has to make the ultimate choice after he finds out Red Hood’s true identity. I love that you get Black Mask, The Riddler, and The Joker all in one film because it packs more  of a punch and it helps explain the story. The only thing I didn’t like honestly was The Joker’s voice and that’s only because I am used to Mark Hamill as The Joker. Nevertheless, its a great story and well written overall like I have already said. Check this one out for sure if you are a fan of Batman and/or the Batman animated films/series. I am going to give this one an A- for a final grade.