There are only 148 days left in the year (which includes today) to try and see movies that I have always wanted to see. So, that is why I took the opportunity to see the film Deliverance for today’s film. The Cahulawassee River in Georgia is about to be flooded to create one big lake and before that can happen, outdoor fanatic Lewis Medlock (Burt Reynolds) wants to canoe down the river. So, he brings along three of his closest friends in Ed (Jon Voight), Bobby (Ned Beatty), and Drew (Ronny Cox) along for the ride. Unfortunately for them while on the canoeing trip, they run into a little trouble that ends up being more than they ever bargained for in the backwoods of Georgia. The film also stars Billy Redden (Big Fish) as Lonnie, Bill McKinney (Back To The Future Part III) as Mountain Man, Herbert ‘Cowboy’ Coward (Ghost Town: The Movie) as Toothless Man, Lewis Crone as First Deputy, Ken Keener as Second Deputy, Ed Ramey as Old Man, James Dickey (To The White Sea) as Sheriff Bullard, Macon McCalman (Smokey And The Bandit) as Deputy Queen, Belinda Beatty (Exorcist II: The Heretic) as Marta Gentry, and the film was directed by John Boorman (Excalibur).

If there was ever a movie in the world that should make you scared of the backwoods of the south, then this is definitely it. I always remember the references to the film that people would make, but I had to finally see it for myself. There is one scene in the film that is just very uncomfortable to watch and luckily you don’t see much of it, but the sodomy scene is very unnerving to watch. The film kind of has three different tones to it as far as the story is concerned where it starts as an adventure film before it becomes a dark survival film which is then followed a game of mystery as to a whodunit and who will falter and screw up. For most of the film, you believe that Burt Reynolds is going to be the leading man of the film until Jon Voight comes in and steals the show. He took the ball and he absolutely ran with it giving us an excellent performance. The cinematography for the most part is very good and I really loved the scenic shots and the mountain climb scenes that Voight does. One of the cool sequences as well as the dueling banjo scene between Ronnie Cox’s character and Billy Redden’s. That was a very cool sequence to see in the film and an iconic scene. Some of the people in the film, you wonder where they found them in the first place because they do look odd as hell. Check it out on Encore Play as we speak. I am going to give the film an A- for a final grade. 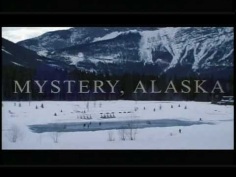 Without looking at a synopsis for a film, I honestly thought when I saw the title Mystery, Alaska that we were going to get a film like Fargo for example. I thought maybe it would be a town with a dark secret, but that is definitely not the case. In Mystery, Alaska, they pride themselves on their ability to play hockey in a town that has sub zero temps almost all year round. One day a former townee (Hank Azaria) returns from New York with news that NHL hockey powers the New York Rangers want to challenge the team to a traditional pond hockey game. The town accepts the challenge with some doubters, but they’ll soon have to realize that there are a lot more internal problems they’ll need to solve before they take on the hockey power. The film stars Russell Crowe (Robin Hood) as John Biebe, Burt Reynolds (Smokey And The Bandit) as Judge Burns, Mary McCormack (Private Parts) as Donna Biebe, Colm Meaney (Con Air) as Mayor Pitcher, Lolita Davidovich (Gods And Monsters) as Mary Jane Pitcher, Maury Chaykin (Entrapment) as Bailey Pruitt, Ron Eldard (Sleepers) as Skank Marden, Kevin Durand (X-Men Origins: Wolverine) as Tree, Scott Grimes (Robin Hood) as Birdie Burns, Rachel Wilson (The Glass House) as Marla Burns, Adam Beach (Flags Of Our Fathers) as Galin Winetka, and the film was directed by Jay Roach (Trumbo).

This was actually a very good film that has the feel of The Mighty Ducks and the look of every other sports film released in that time frame. It’s the true underdog story of a small Alaskan hockey team that does the impossible by playing a pro team. The thing that is unique about this film is the challenges a lot of the actors face in the film like infidelity, corporate takeover, as well as other social issues. Russell Crowe was great, Burt Reynolds was very good, and just about everybody in the film did a great job. I loved the cinematography in the film especially during the big hockey game. These kinds of ideas make you wonder if a game like this would be possible, but I honestly doubt it. The players union would probably never approve of it in the first place. The idea of a spot uniting a town is not so far fetched as sports is a common thread for people and various towns all over America. One of my favorite things about the film is the cameo from Mike Myers (Shrek) who plays a character that is a parody of hockey commentating legend Don Cherry. That was definitely a highlight for me to see him in this film. I know Rotten Tomatoes gave the film a 38% rating, but I really enjoyed the film because it was more than just a hockey film. That is why I have decided to give the film an B+ for a final grade.