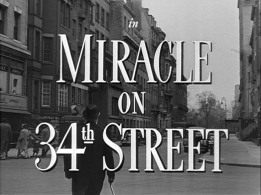 I just wanted to start by wishing all of you movie lovers out there a very safe and Merry Christmas. To get into the spirit of Christmas, I wanted to to watch a film that had to do with the very holiday itself so I chose to watch Miracle On 34 Street (the 1947 version). Doris Walker (Maureen O’Hara) is the special events coordinator for Macy’s who has discovered a problem thanks to an old man (Edmund Gwenn). Her Santa Claus for the Thanksgiving Day Parade is drunk and unable to continue. So, she hires the old man to be Santa and after he does a great job, he is then hired to be the Macy’s store Santa. The only problem is that the old man claims to be Kris Kringle himself, but there are people that do not believe him. The film also stars Natalie Wood (Rebel Without A Cause) as Susan Walker, John Payne (The Razor’s Edge) as Fred Gailey, Gene Lockhart (His Girl Friday) as Judge Henry X. Harper, Porter Hall (Mr. Smith Goes To Washington) as Granville Sawyer, William Frawley (I Love Lucy) as Charlie Halloran, Jerome Cowan (The Maltese Falcon) as Dist. Atty. Thomas Mara, Philip Tonge (Witness For The Prosecution) as Julian, and the film was directed by George Seaton (Airport).

This is the very last Sunday at the Classics as far as this challenge is concerned, but I just may keep it going after the challenge is over. I have seen some great films for Sunday at the Classics, but this is by far one of my favorite ones. The film features some amazing performances from the likes of John Payne, Edmund Gwenn, and even little Natalie Wood who would go on to be even more famous for her role in Rebel Without A Cause. The story of the film is just as amazing because it was a well written tale and a different kind of take on Christmas. It was a tale of believing in something not because people tell you to, but because it feels right to you. The trial scenes were amazing and you have to love the judge who constantly looks to his campaign advisor for advice on how to judge the case. The cinematography was pretty good as well and I had the chance to see the colorized version, but I chose to go old school for my first go around. This was an all around great film that featured great writing, actors, costumes, the sets, and even the cinematography. You have to do yourself a favor and check this film out for yourself before you watch the remake (which I also haven’t seen). I am going to give the film an A+ for a final grade.