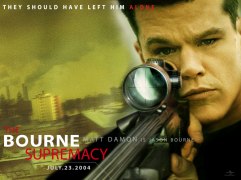 Jason Bourne, the fifth film in the Bourne series comes out on July 29Th in theaters everywhere and I have not seen the whole series. So, what better place then here to start watching the series to catch up before the release of the film. For Ass Whoopin Wednesday, we are checking out the second film in the series The Bourne Supremacy which once again stars Matt Damon (The Bourne Identity) as Jason Bourne. Jason and Maria (Franka Potente) have been in hiding for the last two years, but a mysterious Russian hitman (Karl Urban) has managed to track him down in Goa, India. Kirill (Urban) manages to kill Maria instead of Jason and that sets Jason off to try and find some answers, but Jason walks into a sh** storm in Berlin. Jason is accused of murdering an agent and CIA official Landy (Joan Allen) is on the hunt. Bourne has to find some answers in order to clear his name before Landy can get to him. The film also stars Brian Cox (The Bourne Identity) as Ward Abbott, Julia Stiles (Save The Last Dance) as Nicky, Gabriel Mann (Revenge) as Daniel Zorn, Marton Csokas (xXx) as Jarda, Tom Gallop (Jerry Maguire) as Tom Cronin, Oksana Akinshina (Hipsters) as Irena Neski, and the film was directed by Paul Greengrass (Captain Phillips). To see all of the stats and read the final review of the film, please click here to go to Moshpits and Movies.