Spoiler Alert: I just wanted to take the time to warn you that the article may contain some spoilers. Read on if you dare, but you’ve been warned. The purge is an annual event that was set up by the New Founding Fathers Of America to help the country every year on the same day for 12 hours. Anything you can imagine for those 12 hours is absolutely legal, but only for those 12 hours. The NFFA believe that it helps cleanse America of the unwanted members of society, while their are others that believe it lines up the pockets of the rich while eliminating the poor and under privileged. In The Purge: Election Year, there is one that dares to challenge this belief. Senator Charlie Roan (Elizabeth Mitchell) was a victim of the purge and she is daring to challenge the system by running for president. The only problem is that she is gaining ground and the NFFA are looking to eliminate her on the night of the purge to guarantee that she doesn’t win. Now it’ up to Leo Barnes (Frank Grillo) to try and protect her before they get to her. The film also stars Mykelti Williamson (Forrest Gump) as Joe, Joseph Julian Soria (Max) as Marcos, Betty Gabriel (Experimenter) as Laney Rucker, Terry Serpico (Donnie Brasco) as Earl Danzinger, Edwin Hodge (The Purge) as Dante Bishop, Kyle Secor (Sleeping With The Enemy) as Minister Edwidge Owens, Ethan Phillips (Benson) as Chief Couper, and the film was directed by James DeMonaco (The Purge: Anarchy). 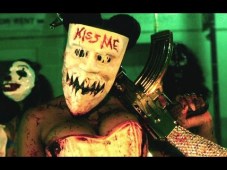 As far as all The Purge movies are concerned, this is definitely not the best in the series, but it continued what The Purge: Anarchy had did with the action. One of my biggest complaints is that I wanted to see more of the weird Purges that happen around the city because there looked like there was some cool ones like the guillotine. In the film, you get a bunch of close calls like the group is about to go through some hell, but someone is there to stop it. Now, I am not saying that there isn’t some bad ass action because there is that for sure in the film. One of my favorite scenes involves newcomer Brittany Mirabile (she’s the picture in this paragraph) who is proving to be a raging psycho who just wants to steal her candy bar. Things are looking bleak for our senator and co., but then out of nowhere they are hit by a van and they get shot up to hell. I definitely loved the last sequence with the minister inside the church with the NFFA as they are getting ready for the ultimate purge. The scene is perfect in my opinion because it exemplifies how crazy society has gotten with the idea of the purge (or tradition) and the lengths they are willing to go to protect it. It also shows how an ideal can turn people into monsters and how it easy it is to mask it as progress. They timed this film perfectly considering this is election year. Things are not going as well in this reality as they are not going so well in the film. People are clamoring for a change, but we have to be careful as to what kind of change. I am going to give the film an B+ for a final grade because the costumes are great, but the overall film isn’t better than the rest.