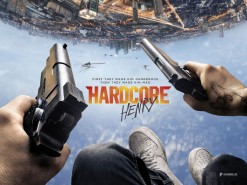 In my experience watching films, I feel like I have seen just about everything especially in the found footage genre. Well for this week’s Ass Whoopin Wednesday film, we have a film shot in a video game style first person shooter view called Hardcore Henry. Henry (Ilya Naishuller) has just awoken on a table and told that he had been severely damaged and that he is a cyborg now by his wife Estelle (Haley Bennett). But when the evil Akan (Danila Kozlovsky) comes looking for Henry, he’ll kidnap Estelle and put Henry through the ultimate test, but Henry has a limited amount of time to not only upgrade himself, but to save Estelle as well. The film also stars Sharlto Copley (The Snow Queen 2) as Jimmy, Andrei Dementiev (Biting Elbows: Bad Motherf**ker) as Slick Dimitry, Svetlana Ustinova (Heaven On Earth) as Olga the Dominatrix, Darya Charusha (Muzhskaya zhenskaya igra) as Katya the Dominatrix, Oleg Poddubnyy (Biting Elbows: Bad Motherf**ker) as Yury, Tim Roth (Planet Of The Apes) as Henry’s Father, Will Stewart (Red Shoe Diaries 18: The Game) as Robbie, Cyrus Arnold (Zoolander 2) as Young Bully 2, Martin Cooke (Begemot i kompot) as Marty, and the film was directed by Ilya Naishuller (Biting Elbows: Bad Motherf**ker). To check out the rest of the review and the stats of the film, please click here to go to Moshpits and Movies.