I just wanted to start by saying that I hope that everyone has had a wonder Mother’s Day especially all the moms out there. I didn’t choose any films that had anything to do with mothers, but rather I went for a classic in The Bonfire Of The Vanities. The film starred Tom Hanks (Bridge Of Spies) as Sherman McCoy, a hot shot wall street broker whose whole world is about to crumble. You see Sherman has been cheating on his socialite wife (Kim Cattrall) with a very seductive mistress named Maria (Melanie Griffith). One night, they get into an accident when they hit a young black man and send him into a coma. It puts Sherman in a lot of trouble and with the help of a reporter (Bruce Willis) he will try to prove his innocence before he gets put away for good. The film also stars Saul Rubinek (The Family Man) as Jed Kramer, Morgan Freeman (The Shawshank Redemption) as Judge Leonard White, John Hancock (A Soldier’s Story) as Reverend Bacon, Kevin Dunn (Transformers: Revenge Of The Fallen) as Tom Killian, Clifton James (The Man With The Golden Gun) as Albert Fox, Kirsten Dunst (Interview With The Vampire) as Campbell McCoy, and the film was directed by Brian De Palma (Carlito’s Way).

This was a very different film than I was used to watching, but how can you not want to watch a film that starred both Tom Hanks and Bruce Willis? Bruce at one time was known for doing films other than action flicks and Tom Hanks is just Tom Hanks (that means he’s awesome). I had absolutely no idea that Kirsten Dunst was in this film until I looked on IMDB after I watched the film. I thought that was kind of crazy to see, but not surprised as she let her real stamp with Interview With The Vampire. One of the biggest pluses for this film is the fact that the story is an amazing story. From the beginning all the way to the end, the story keeps you hooked because you want to know what happens to poor Tom Hanks. The film kind of touches on the ideas of racism in the New York area and the way they feel that they didn’t get the fair shake that over-privileged whites did all the time. Then the film shows you how distorted the truth can be when there is too much interest into a issue when there are too many sides that benefit. A mayor who looks at an opportunity to persecute a rich white man to try and gain the African-American vote while a reverend is looking to use the case to cash in. All of the acting in the film was superb and I really had no complaints against anyone in the film. This is a film that is definitely worth a watch even if it’s at least once. I am going to give the film an A- for a final grade. 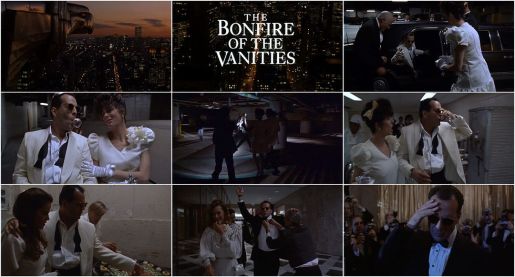