The finish line is so close at this point and I can see it which is super exciting as the challenge comes to a close soon. When I saw the trailer for today’s film Passengers, I thought that this film could either be a 2001: A Space Odyssey rip off or it could carve it’s own way into the annals of Sci-Fi greatness. Nevertheless, I chose to watch it for today’s film cause it features a couple of superstars in my opinion. There are always issues that are raised with the planet Earth like pollution or over population that we are always imagining if we could inhabit other worlds. That is why the Starship Avalon is on a 120 year journey through space to inhabit a new world known as Homestead II and all of it’s passengers are in a deep hibernation sleep. That is until Chris Pratt (Guardians Of The Galaxy Vol. 2) who plays passenger Jim Preston is woken up 90 years too early. With 90 years ahead of you what are you to do, well you try to enjoy it and that is what he attempts to do with fellow awoken passenger Aurora (Jennifer Lawrence) until problems with the shop become evident which could derail the journey all together. The film also stars Michael Sheen (Nocturnal Animals) as Arthur, Laurence Fishburne (Mystic River) as Gus Mancuso, and the film was directed by Morten Tyldum (The Imitation Game). 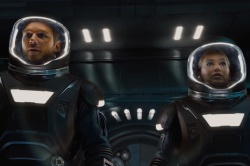 Spoiler Alert: There is going to be some information leaked in this paragraph that could give away some details or all the details in the film. So either proceed with caution or do not read any further, but you were warned. You are probably why I didn’t list a lot of actors above and that is because while the film does list Andy Garcia, Julee Cerda, and some others, they are merely just cameo appearances compared to the work that Pratt, Sheen, Lawrence, and Fishburne put in. As I said above, I thought this was going to be the modern day 2001: A Space Odyssey, but it really wasn’t because it was it’s own film. If you are alone on a ship and you have 90 years to go before you land on a new planet (which you obviously won’t be alive to see), what are you going to do with the time? That is the exact question that Chris Pratt’s character is faced with and he makes a very difficult and selfish decision, but it creates one of the big turning point conflicts in the script besides the ship’s problems. The ending of the film is very cliche in how it ends which is my only complaint. It’s one of those endings that you are hoping for something different, but they give you the one you expected all along. Otherwise, the acting was great in where two actors were really able to hold your attention for the whole film which can be just as difficult as only one. Check this one in theaters now, I am going to give the film an A- for a final grade.