You all definitely know by now that I love to watch films that are based on true stories especially when they have to do with where I am from. In 1952, the greatest rescue mission in Coast Guard history happened and it’s the subject for today’s film The Finest Hours. While at sea, an oil tanker called the USS Pendelton that wasn’t properly fixed splits in half leaving it’s crew to literally fight for their lives as they wait for rescue. Bernie Webber (Chris Pine) is a coast guard first mate who is looking to forget the events of the previous year. As he is about to get married to his fiance (Holliday Grainger), he is called out to sea along with Richard Livesey (Ben Foster), Andy Fitzgerald (Kyle Gallner), and Ervin Maske (John Magaro) to rescue the ships crew members in an impossible mission. The film also stars Casey Affleck (Gone Baby Gone) as Ray Sybert, Eric Bana (Hulk) as Daniel Cluff, John Ortiz (The Drop) as Wallace Quirey, Graham McTavish (The Hobbit: An Unexpected Journey) as Frank Fauteux, Michael Raymond-James (Jack Reacher) as D.A. Brown, Josh Stewart (The Dark Knight Rises) as Tchuda Southerland, Beau Knapp (The Nice Guys) as Mel Gouthro, and the film was directed by Craig Gillespie (Lars And The Real Girl). 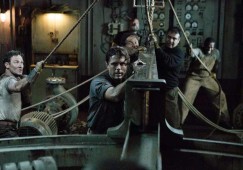 This was truly an incredible film and an incredible story of testing the human limits and believing in yourself. The cinematography for the film was absolutely amazing even though at times you could tell that most of it was filmed on a soundstage. The one thing that I found funny about the film is that every spoke in a John Fitzgerald Kennedy Boston accent. Like the accents are as thick as you could possibly go as far as the time period is concerned, but maybe everyone spoke like that back then. Now as always, I try to look up what was fact and/or fiction about films that are said to be based on a true story. What was fact was that the USS Pendelton did have a crack in it and that even though it wasn’t properly fixed, it still somehow passed inspection. One of the big things that was fiction about the film is that Miriam was actually home sick with the flu the whole time this was going on. To read more about what was fact or fiction, click here. The caliber of actors that are in this film is absolutely incredible as well with guys like Ben Foster, Casey Affleck, Chris Pine, and so many more made this film great with their incredible acting. This truly is ana incredible film and story as I said above and one that if you love true stories, rescue type films, and history then you should see this. The film is available on Netflix as we speak and with that being said, I am going to give the film an A- for a final grade.

It’s Tuesday which can only mean one thing and that is that it is time for Based on a Truesday Story. Based on a Truesday Story is a segment I did on my other blog where we watch films that are based on a true story and for today we are doing American Gangster. Frank Lucas (Denzel Washington) is an African American drug lord from Harlem, New York who decides that the best way to take over the competition is to fly directly to the source in Vietnam. He quickly becomes the drug kingpin of New York, but that attracts the wrong kind of attention. Richie Roberts (Russell Crowe) is an honest cop who gets put on the case to track down Frank Lucas and shut him down completely and anyone else corrupt as well. The film also stars Chiwetelu Ejiofor (12 Years A Slave) as Huey Lucas, Josh Brolin (The Goonies) as Trupo, Lymari Nadal (The Blackout) as Eva, Ted Levine (The Silence Of The Lambs) as Lou Toback, Roger Guenveur Smith (He Got Game) as Nate, John Hawkes (Lincoln) as Freddie, RZA (The Man With The Iron Fists) as Moses Jones, Carla Gugino (Watchmen) as Laurie, Idris Elba (Thor) as Tango, Common (Selma) as Turner Lucas, TI (Ant-Man) as Stevie Lucas, Armand Assante (Judge Dredd) as Dominic Cattano, and the film was directed by Ridley Scott (Alien).

What happens when you put Denzel Washington in a leading role of a film? Well, I hope that you are preparing yourself for one hell of a performance because that is exactly what you are getting with this film. The thing I loved about this film is that you sort of get two stories in one where you have one guy who wants to make his teacher and his family proud by being at the top of his game while you have another who feels that honesty is the best policy and it will lead him over the dirty cops. I have to be honest in saying that if I found a million dollars as a cop, I may skim a few off the top of it. It’s kind of the story of the two roads with the one less traveled and you can guess who took which road in this film. There are so many actors that appeared in this film that I couldn’t fit above that deserved honorable mention like Cuba Gooding Jr., Ruby Dee, Jon Polito, John Ortiz, and many more who do a terrific job in the film. Now we all know that Hollywood takes some civil liberties with their films, but this one seems to have a lot according to an article on historyvshollywood.com. One story is that Frank says in the film that he drove for Bumpy for 15 years. Reports indictate that Bumpy was released from prison in 1963 and he died in 1968 leaving only a five year window. Check out more of the facts vs fiction in that article that I provided. The film is excellent with a very good story, amazing cinematography, and it’s the kind of gangster movies we love here in the states. So, what more could you possibly ask for? I am going to give the film an A- for a final grade.