Today’s film that I chose was one that I really wanted to read the book before going to see it, but I never got the chance and it was officially released today. So for today, I chose to watch Mike And Dave Need Wedding Dates which stars Adam Devine (Pitch Perfect) and Zac Efron (Neighbors) as Mike and Dave Stangle. The Stangle brothers are a couple of guys that are absolutely inseparable. They work together, they party together, and they screw stuff up together, but there are people that want it to stop.  You see their sister Jeanie (Sugar Lyn Beard) is getting married in Hawaii and their parents are worried that they are going to screw it all up. The only way they can go is by finding wedding dates, but when they do they get more than they expected. The film also stars Aubrey Plaza (Dirty Grandpa) as Tatiana, Anna Kendrick (Pitch Perfect) as Alice, Stephen Root (Office Space) as Burt, Stephanie Faracy (Hocus Pocus) as Rosie, Sam Richardson (Veep) as Eric, Alice Wetterlund (Girl Code) as Cousin Terry, Lavell Crawford (Breaking Bad) as Keith, Kumail Nanjiani (Silicon Valley) as Keanu, Jake Johnson (Let’s Be Cops) as Ronnie, and the film was directed by Jake Szymanski (7 Days In Hell). 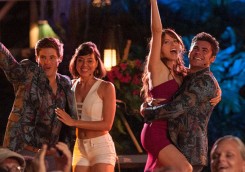 I was a little skeptical about the film heading in because I thought it was going to be one of those films where the trailer was funnier than the film itself.That was definitely not the case whatsoever with this film. This definitely has to be a contender for comedy of the year and I know there’s a lot of time left, but I couldn’t stop laughing. If Adam Devine and Zac Efron weren’t making you laugh, Aubrey Plaza and Anna Kendrick were definitely there to provide some laughs as well. There was just a lot of great chemistry going around in this film and you could definitely see it all around with every moment in the film. It’s hard to choose a favorite scene because any moment with the Stangle brothers was absolutely hilarious like the push pop scene or even the ATV aftermath scene was great. Sugar Lyn Beard has her moments in the film too tat were great whether it be with the masseuse or getting high on Ecstasy. After seeing this film, Zac Efron has definitely grown on me and he plays the role of funny, but sensitive dumb jock guy every well in some of his movies. The proof is in the pudding with the Neighbors series and this. I’m not sure I like where Aubrey Plaza is going with her career, but I an’t complain cause I am a huge fan of hers. I didn’t realize until now that this is the second straight film I have watched and reviewed that takes place in Hawaii. Maybe this is a sign of a new vacation spot that I should go to. Nevertheless, this is definitely a comedy to check out and with that being said I am going to give the film an A- for a final grade.