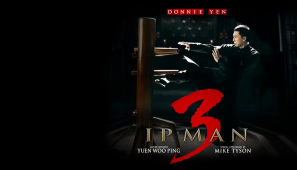 For this week’s Ass Whoopin Wednesday, I wanted to finish something that i had started some months ago when I began watching a series about the famous Grandmaster Ip Man. Now I present to you what seems like the final film in the Wilson Yip (IP Man) directed series in IP Man 3. The film once again follows IP Man (Donnie Yen) as he is a lot older (because Bruce Lee is now a teenager), but not a lot has changed in Hong Kong since we last seen him. The city is now being run by a notorious boxing gangster named Frank (Mike Tyson) and he is trying to buy up all the schools in Hong Kong to try and close them down, but IP Man will not stand for it. IP Man also has to answer the challenge of a jealous Wing Chun master by the name of Cheung Tin-chi (Max Zhang) while also trying to take care of his sick wife (Lynn Hung). The film also stars Patrick Tam (Port Of Call) as Ma King-Sang, Karena Ng (Magic To Win) as Miss Hong, Kai-Chung Cheung (Keeper Of Darkness) as Chui Lek, Kent Cheng (IP Man 2) as Fatso, Ka-Yan Leung (The Man With The Iron Fists) as Master Tin, and Kwok-Kwan Chan (Kung Fu Hustle) as Bruce Lee. To see the rest of the review, please click here to go to Moshpits and Movies.