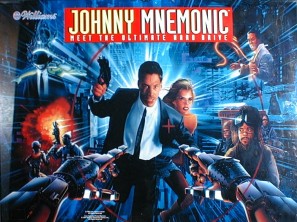 For today’s Ass Whoopin Wednesday film, I wanted to check out something else from Keanu Reeves after the news I had heard about John Wick 2. I have always been curious about Johnny Mnemonic and I figured what better time than now and we are promoting a Mixed tag team (man and woman) match this week. In the distant future of 2021, things are a lot different on the planet Earth as corporations now runs things in the world. The way information is delivered has also changed as human couriers named Mnemonics upload information into their heads. Johnny (Reeves) is a courier who agrees to carry an unusually large amount of information that will prove to be dangerous. What I mean by dangerous is that the Yakuza who basically do the dirty work for corporations wants the info in his head and with the help of his new bodyguard Jane (Dina Myer), he will have to do his best to get the information to the proper place before he dies because of it. The film also stars Ice-T (New Jack City) as J-Bone, Henry Rollins (Heat) as Spyder, Dolph Lundgren (Rocky IV) as Street Preacher, Udo Kier (Flesh For Frankenstein) as Ralfi, Tracy Tweed (Sunset Heat) as Pretty, and the film was directed by Robert Longo. To read the rest of the review and check out the stats, click here.