One of my all time favorite actors from the 1980’s is definitely John Cusack who starred in many classics like One Crazy Summer, The Sure Thing, Tapeheads, Say Anything, and so many more. In 2000, he starred in the Stephen Frears (Philomena) film High Fidelity. In the film, he plays record store owner, compulsive list maker Rob Gordon, a man that could use a little growing up emotionally. One day, his girlfriend Laura (Iben Hjejle) leaves him and Rob can’t figure out for the life of him why it happens to him. So, he develops a top five list of break ups in his life and he gets to the bottom of them while trying to recuperate his own life along with his crazy employees. The film also stars Jack Black (Orange County) as Barry Judd, Tim Robbins (The Shawshank Redemption) as Roy, Todd Louiso (Thank You For Smoking) as Dick, Lisa Bonet (The Cosby Show) as Marie, Catherine Zeta-Jones (The Mask Of Zorro) as Charlie, Joan Cusack (Say Anything) as Liz, Lili Taylor (The Conjuring) as Sarah, Joelle Carter (American Pie 2) as Penny, Natasha Gregson Wagner (Urban Legend) as Caroline Fortus, and Sara Gilbert (Roseanne) as Anna. 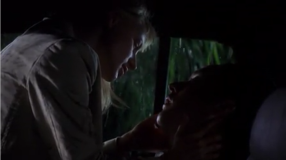 While this can be filed as a new age romantic comedy film for John Cusack, who was used to starring in those back in the 80’s, also manages to do one thing as well. That is it combines a love for music and vinyl which is right up my alley. This was one of those films that I had only seen bits and pieces of, but I am glad I saw this. If you know John Cusack films, then this is a pretty particular film for him because he is constantly breaking the fourth wall and talking to you which he has done plenty of times in the past. It’s that touch of the 80’s that they can’t seem to get rid of, but i like it because I like being talked to. The film sort of has it all from drama, romance,  a little comedy courtesy of Jack Black, kick ass music, and the amazing Catherine Zeta-Jones. The film did at times attack pop culture as to say that it wasn’t music with heart or a soul which can be true some of the time. One thing that I found pretty cool is that there is a list online of all the top five lists from the film which you can check out here. You should also be checking out the soundtrack which was as I mentioned before absolutely amazing. Meanwhile, I am going to give the film an A- for a final grade.