There are movies for this challenge that I promised myself that I was going to watch before it was over and today’s film is one of those said films. One of the greatest composers of the 18TH century was the virtuoso Wolfgang Amadeus Mozart and for today’s film I decided to watch the 1984 film Amadeus. Antonio Salieri (F. Murray Abraham) likes to believe that he is a great composer and writer of classical music, but he had to work hard for it. Unlike his counterpart Wolfgang Amadeus Mozart (Tom Hulce) who was born with a natural talent and ability that it drives Salieri mad with jealousy. The film is Salieri’s take on what drove him to the point that he would actually murder the young prodigy. The film also stars Elizabeth Berridge (The Funhouse) as Constanze Mozart, Roy Dotrice (Hellboy II: The Golden Army) as Leopold Mozart, Christine Ebersole (The Wolf Of Wall Street) as Katerina Cavalieri, Jeffrey Jones (The Crucible) as Emperor Joseph II, Kenneth McMillan (Dune) as Michael Schlumberg, Charles Kay (Henry V) as Count Orsini-Rosenberg, Cynthia Nixon (Sex And The City) as Lorl, Kenny Baker (Star Wars: Episode IV- A New Hope) as Parody Commendatore, Simon Callow (James And The Giant Peach) as Emanuel Schikaneder, and the film was directed by Milos Forman (The People Vs Larry Flynt). 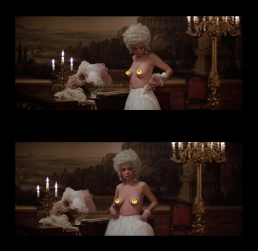 I just want to warn all of you with short attention spans that this film is a little over three hours long so if you can handle it then proceed. Amadeus is definitely one of those films that they went all out for because it has an amazing score, amazing set designs, amazing costumes, and most importantly great acting that makes it complete. The soundtrack features so much as far as amazing 18TH century classical music and amazing opera music that should satisfy any fan of that genre. The set designs and costumes were so amazing that it actually makes you feel like you are walking and living in 18TH Century Austria which is what a time period piece is supposed to do in the first place. One thing I do know is that this is actually a fictionalized look at the life of Mozart or at least the idea of Salieri killing Mozart. Mozart died of an illness that is often debated as to what it was exactly. When he was working on his Requiem, it said that he dictated in bed to one of his proteges and not Salieri (although this is not proven either). F. Murray Abraham was absolutely brilliant in his portrayal of a man driven with jealousy and hatred toward God and Mozart. Tom Hulce is brilliant as the virtuoso who if he was a lead singer he would have had LSD (Lead Singers Disease). He knew he was amazing and he wasn’t afraid to show it. I was a little skeptical of Jeffrey Jones playing an Austrian Emperor, but he does a pretty good job at it. You really have to love classical music and Mozart to want to watch this film, but I am a fan of music so I loved it. I am going to give the film an A for a final grade.

I was so impressed with the first film in the Harry Potter franchise that I watched yesterday that I decided to watch another. That is right, I chose Harry Potter And The Chamber Of Secrets for today’s film. Everyone’s favorite young wizard Harry Potter (Daniel Radcliffe) is back at home with his dreadful Aunt and Uncle once again, but a house elf named Dobby (Toby Jones) tries to prevent Harry from returning to Hogwarts Academy. Despite what Dobby said, Harry returns back to Hogwarts only to find that students are being petrified by something. Harry discovers that there is a place in the school called the Chamber of Secrets that was created by the founder Slytherin. Harry finds out that the chamber houses a monster who will kill mudbloods (impure wizards) and that it will be opened by the heir of Slytherin, but who is it? The film also stars Rupert Grint (CBGB) as Ron Weasley, Emma Watson (The Colony) as Hermione Granger, Tom Felton (Risen) as Draco Malfoy, Jason Isaacs (The Tuxedo) as Lucius Malfoy, Robbie Coltrane (From Hell) as Hagrid, Kenneth Branagh (Henry V) as Professor Lockhart, Alan Rickman (Galaxy Quest) as Professor Snape, Richard Harris (Gladiator) as Professor Dumbledore, Maggie Smith (Gosford Park) as Professor McGonagall, Shirley Henderson (Trainspotting) as Moaning Myrtle, Christian Coulson (The Hours) as Tom Marvolo Riddle, Bonnie Wright (The Sea) as Ginny Weasley, and the film was directed by Chris Columbus (The Goonies).

When you do a sequel to a film or when you do a sequel to a film that you know is a part of a bigger picture your only hope is that it’s better than the first film. That was definitely the case with Harry Potter And The Chamber Of Secrets which I enjoyed more than the last before it. The thing that I enjoyed the most about this film is that they added a little bit of suspense to the film where you’re trying to figure out who the heir is. You’re trying to figure out who the monster is and who will he attack? That is honestly what I really loved about this film since I love thrillers. The special effects for this film were turned up a notch for this film and who doesn’t love Dobby? Dobby was honestly the comedic relief the film needed and I am glad that he was a part of the story. He has so many funny moments in the film with Harry and there is one scene that you will absolutely love. The sets were amazing as usual, but my favorite is when he entered the chamber of secrets. There is this one room where he meets the giant monster and the cool looking set which you can see in the picture in this paragraph. There is so much classic cinematography and lighting tricks in this film that are absolutely cool. One scene I noticed was the scene with Dracoy’s father Lucius who when the camera was on him, only his eyes were lit like a true villain while Harry’s who face was illuminated as e was the hero. I had a lot of fun watching this one which is why I am going to give the film an A for a final grade.