It is so crazy to think that after today there are only eight days left in the whole year so choosing the right movies to close out the year is the key. That is why I chose today’s film in Why Him? because I was suspecting that it could be comedy of the year. All Ned Fleming (Bryan Cranston) cares about in life is his family and his company, but one of those things is threatened when he discovers that his daughter Stephanie (Zoey Deutch)is dating internet billionaire and wild boy Laird Mayhew (James Franco). He would normally think it was a phase, but when his family is invited out to his house, he discovers that Laird wants to propose to her. So, he’ll do whatever it takes to convince her why he is not the one for her. The film also stars Cedric the Entertainer (The Soul Man) as Lou Dunne, Megan Mullally (Hotel Transylvania 2) as Barb Fleming, Griffin Gluck (Batman Vs Robin) as Scotty Fleming,  Zack Pearlman (Hot Bot) as Kevin Dingle, Keegan-Michael Key (Vacation) as Gustav, Kaley Cuoco (The Big Bang Theory) as Justine, Casey Wilson (Gone Girl) as Missy Pederman, Andrew Rannells (The Intern) as Blaine Pederman, Adam Devine (Mike And Dave Need Wedding Dates) as Tyson Modell, and the film was directed by John Hamburg (I Love You, Man).

Now I said int he above paragraph that I thought that this could potentially be comedy of the year and I definitely meant that after watching the film. From beginning to end, this film offers you so many funny moments that are just laugh out loud funny. Franco, Cranston, and Keegan-Michael Key offer up a lot of hilarious moments through out the film. One of my favorite moments in the film definitely have to be Cranston on the toilet as Key tries to walk him through the paperless process. Key was absolutely brilliant in the film and definitely deserves MVP recognition for his performance. He will now be in two different films in the year end awards for comedy of the year (Keanu being the other). Zoey Deutch looked beautiful in the film and played an important role in the film setting up those moments, but she also provided us with the drama moments which are important in a comedy. She is after all the center of attention between two men fighting for her as it Cranston vs Franco. A lot of critics are probably going to dog this kind of a film because it’s not up to their standards as far as films are concerned, but use your own opinion. I am a huge fan of James Franco, Zoey Deutch, and Keegan-Michael Key which is why I made the decision to see the film. I opened my mind and I laughed a ton at what they threw at me. This is definitely one of my favorite comedies of the year that also featured a cool cameo from a kick ass rock band, but I’ll let you watch it to figure out who. I am going to give the film an A for a final grade.

Society has always had the need and the want or desire to play God throughout history of cinema (e.g. Frankenstein, Ex Machina). Of course like all of them, they are usually destined to be doomed. So for today’s film, I chose to watch the newest film in Artificial Intelligence entitled Morgan. Morgan (Anya Taylor Joy) is a new breed of artificial intelligence kind of humanoid that was breed as an organism by scientists as an experiment. One afternoon, Morgan has sort of a metal lapse and she attacks a scientist. The corporate company that is paying for the experiment decides that it wants to send in a risk-management consultant by the name of Lee Weathers (Kate Mara). Lee must decide whether Morgan is a valued asset or to terminate a dangerous asset. The film also stars Rose Leslie (The Last Witch Hunter) as Dr. Amy Menser, Michael Yare (Game Of Thrones) as Ted, Toby Jones (Captain America: The Winter Soldier) as Dr. Simon Ziegler, Chris Sullivan (Stranger Things) as Darren, Boyd Holbrook (Gone Girl) as Skip, Vinette Robinson (Sherlock) as Brenda, Michelle Yeoh (Crouching Tiger, Hidden Dragon) as Dr. Cheng, Jennifer Jason Leigh (The Hateful Eight) as Kathy, and the film was directed by Luke Scott (Loom).

The idea for the film was there and for the most part they did a fine job, but maybe the execution didn’t go off as planned. The first part of the film is kind of boring as it’s getting you up to speed with what is going on and exactly who Morgan is. The real excitement in my opinion is when Paul Giamatti shows up to test Morgan as to whether she is an asset for the company or not. That is when the intensity of the film really starts to build up because for a while all you get are pieces of a secret until that secret is finally revealed to you as to why she was locked in the box again. Giamatti is really just there to mess with her mind and prove that she in fact is not human and therefore is not capable of feeling real emotions. He is a ball buster and the only one who is going against science. I didn’t recognize Anna Taylor Joy until I saw that she was in the film The Witch. She was phenomenal in that film and she did a pretty good job in this one as well. One thing that I will say is that she was kind of freaky looking to me which might have been a very small aspect for what they were going for. The one thing I didn’t understand was what was the point of the character of Skip? He really doesn’t serve a real purpose in the film, but he’s just there. There’s a big twist at the end of the film, but if you do the math you’ll figure it out as soon as it happens. I saw the ending coming as soon as it started to unfold which doesn’t bother me too much, but they could have done better with that. Overall, it’s just an OK film that was looking to explore a different aspect of A.I. in cinema. I commend them for that, but it won’t change my grade this time. I am going to give the film an C+ for a final grade. 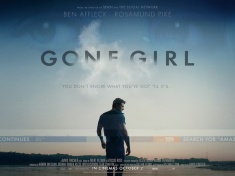 I am continuing down the long list of films that I haven’t seen that I have always wanted to see or am curious about. The film that I chose for today is definitely one of those must see films for me in 2014’s Gone Girl. Ben Affleck (The Town) plays Nick Dunne, a struggling writer who seems to have it all with the perfect wife and such, but he doesn’t seem to be happy. If he isn’t, it’s because Nick’s wife Amy (Rosamund Pike) has just gone missing. As things start to develop in the case, it looks more and more like Nick is at the center of this case and that he may not be that innocent after all. Nick will have to get it together to prove that he isn’t his wife’s killer and that she may not be dead after all. The film also stars Neil Patrick Harris (How I Met Your Mother) as Desi Collings, Tyler Perry (Alex Cross) as Tanner Bolt, Carrie Coon (The Leftovers) as Margo Dunne, Kim Dickens (Hollow Man) as Det. Rhonda Boney, Patrick Fugit (Almost Famous) as Officer Gilpin, Emily Ratajkowski (We Are Your Friends) as Andie, Missi Pyle (The Artist) as Ellen Abbott, Scoot McNairy (Wonderland) as Tommy, Sela Ward (Sisters) as Sharon Schieber, and the film was directed by David Fincher (The Social Network).

Spoiler Alert: There may be information contained in this Article that could potentially spoil the plot of the film so continue with caution or do not read any further if you do not want to know. The one thing that I will say about this film is that this is one twisted and clever story. I will admit to all of you that I never read the book so I didn’t know what to expect out of it as opposed to those who did read it. I do have to say that Rosamund Pike put on one hell of a performance that just steals the show and makes you scared of the crazy girls. Ben Affleck also put on one heck of a performance that makes you kind of understand why they chose him for the role of Bruce Wayne. I do however want to get back to the story because that is where the gold is for this film. It’s a beautifully constructed story of fatal attraction and how men can be easily framed because of our nature. She creates the perfect plan, she executes it, and almost succeeds, but a monkey wrench is thrown in and she still recovers. It’s the true sign of a manipulative psycho path at her finest in this film. This is definitely one of those perfect crime, drama, mysteries that you watch and wonder if he’ll make it or will they find out that she is alive. If you have not seen Gone Girl then I would definitely stick this one on the list of films to watch. I am going to give Gone Girl an A- for a final grade.