In 1990, the explosion of Hip Hop and Rap was starting to take over pop culture, but when today’s film was released I was too young to watch (it also got lost in the shuffle). The film I chose to watch for today is the 1990 hip hop influenced comedy House Party. All young Kid (Christopher Reid) wants to do is survive the day and go to his best friend Play’s (Christopher Martin) party that he’s throwing later that night. The only problem is that Kid got in trouble at school and his father (Robin Harris) found out and grounded him. Despite being grounded, Kid manages to escape his house, but the trouble is far from over for him along the way when he runs into the one group after him. Will they get him or will he make it to the party? The film also stars Martin Lawrence (A Thin Line Between Love and Hate) as Bilal, Tisha Campbell-Martin (My Wife And Kids) as Sidney, A.J. Johnson (Sister Act) as Sharane, Kelly Jo Minter (A Nightmare on Elm Street 5: The Dream Child) as LaDonna, Daryl Mitchell (Galaxy Quest) as Chill, John Witherspoon (Friday) as Mr. Strickland, Full Force (Paul Anthony, B-Fine, Bowlegged Lou) and the film was written and directed by Reginald Hudlin (Boomerang).

I just read a cool fact about the film in that DJ Jazzy Jeff and Will Smith were supposed t0 be the roles of Kid and Play, but they chose not to do it hence Martin and Reid getting the roles. Wait there’s more, so when it came time to do The Fresh Prince Of Bel-Air, Martin and Reid were supposed to be in that show, but they declined and Will Smith and DJ Jazzy Jeff took their place. The crazy thing to is that when you are watching the film, the relationship between Martin Lawrence and Christopher Martin seems so natural and it should seeing as they are cousins. There were so many great and funny moments in the film especially with Martin Lawrence and then there are those I would have found funny back in the day like Full Force’s parts. One of my favorite parts in the film is the freestyle battle between Kid and Play in the film. The whole time before the battle you are led to believe that Kid is horrible and that Play is the slick rapper, but boy are we surprised when Kid kills it. It’s a fun scene that just reminds you of how awesome it was when Hip Hop exploded on to the scene. John Witherspoon was great as the annoying neighbor who wants to call the cops constantly and Robin Harris was just awesome from beginning to end with his insults and quick wit. It’s a fun film that you should enjoy especially if you love old school hip hop and George Clinton makes a cameo. I am going to give the film an A- for a final grade.

Has there ever been a time that when you first saw a poster of a car with a bulletproof vest on that it didn’t make you curious as to what the heck the film was about? That is the exact feeling I had when I first the poster for Keanu displayed at my local theater chain. The film stars Jordan Peele (Key And Peele) as slacker Rell Williams, a man who was just dumped by his girlfriend and is hating life. That is until an adorable kitten shows up at his doorstep and gives him a whole new outlook and lease on life. One day while out his cousin Clarence (Keegan-Michael Key), he comes home to find his apartment broken into and Keanu is missing. Now with his cat missing, he will stop at nothing to find his dear sweet friend and bring him back home safely even if it means mixing it up with a gang. The film also stars Method Man (How High) as Cheddar, Tiffany Haddish (Meet The Spartans) as Hi-C, Darrell Britt-Gibson (Squatters) as Trunk, Jason Mitchell (Straight Outta Compton) as Bud, Jamar Malachi Neighbors (Underbelly Blues) as Stitches, Luis Guzman (Carlito’s Way) as Bacon, Will Forte (MacGruber) as Hulka, Nia Long (Friday) as Hannah, and the film was directed by Peter Atencio.

I can’t begin to tell you how pleasantly surprised I was at how awesome of a movie this was. I was going into it thinking that this could be complete crap, but I left still laughing at some of the scenes I had just witnessed in the film. This is a perfect example of a nerd comedy where we are laughing with them with the pop culture references and their take on racial weirdness. If you loved what they did on their show Key and Peele, then there is no reason why you wouldn’t love this film. One of the examples of the racial weirdness would be the part when Peele tells Key that he sounds like Richard Pryor making fun of white people and Key tells Peele that he sounds like John Ritter. That is until they fall into the criminal world where they pretend to act like tough African American Gangsters. Oh and Key’s character is obsessed with George Michaels which doesn’t get anymore white than that. Although, I loved the scene where Key is going through a trip ad he’s in a George Michaels video. One of the highlights of the film is Kenau, I mean let’s not lie he is so adorable. There is a special cameo in this film that I won’t mention who, but I think you can figure it out. I was so happy to see Jason Mitchell who in my opinion had the breakout performance in Straight Outta Compton as Eazy-E does a terrific job as Bud in this film. I was a big fan of the film and think this is one that you should check out. I am going to give the comedy an A- for a final grade because they take their style of sketch comedy and they made it work as a film. 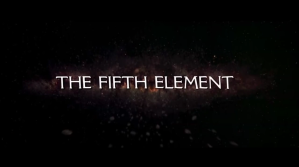 For today’s film, I felt like watching a Sci-Fi movie and there was one for some reason that I had never seen before. The Fifth Element was one of those films that I had never seen and took the chance to see it for today. The film stars Bruce Willis (Die Hard) as a retired special Ops agent Korben Dallas, a man that is hired to protect a supreme being named Lola (Milla Jovovich) and retrieve some important stones. You see in the film, they explain that supreme beings have come to Earth to protect human beings from evil forces as the evil forces come every 300 years. It’s 300 years in the future and the evil forces are coming and they need the stones to protect the Earth from the evil forces. The film also stars Chris Tucker (Friday) as Ruby Rhod, Ian Holm (The Lord Of The Rings: The Fellowship Of The Ring) as Father Vito, Luke Perry (Buffy The Vampire Slayer) as Billy, Brion James (Blade Runner) as General Munro, Tommy “Tiny” Lister (No Holds Barred) as President Lindberg, Lee Evans (There’s Something About Mary) as Fog, Charlie Creed-Miles (Harry Brown) as David, Gary Oldman (The Dark Knight) as Jean-Baptiste Emanuel Zorg, and the film was directed by Luc Besson (Lucy). 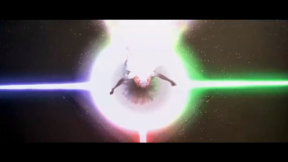 I am definitely happy that I finally took the time to watch this film. All I have to say is that Milla Jovovich is amazing hot and she was nice to look at. The film has it all from action to suspense that kept you on the edge of your seat to some comedy with Chris Tucker who while his character is annoying, he was funny. This film was like Die Hard meets any of the great Sci-Fi film we all love. Bruce Willis brought that bad ass mentality to the film that he made famous in the Die Hard series. The cinematography and special effects were absolutely awesome and I love the costume designs especially with some of Milla’s outfits. I don’t remember what they were called, but some of the aliens looked goofy and awesome. The last 30 plus minutes of the film is where all the magic happens on screen and it was worth the watch. One thing that kind of confused me is that Luke Perry had his name in the opening sequence credits and he’s only in the film for maybe fifteen minutes. I guess he was a big enough name at the time that he could get those. The other thing that I could have done without was Tommy “Tiny” Lister as president of the territories, but that’s how it goes. This is definitely one of my favorite Sci-Fi movies that I have seen and that is why I am giving the film an A- for a final grade.