Did you know that there are roughly 66 days until my favorite holiday of the whole year is here. That holiday I am talking about is Halloween and during the month of October, we have 31 days of Halloween (31 Days of Horror movies). I just couldn’t wait until then and I have one that I think everyone will enjoy for today. Today’s film of course is the much talked about horror/thriller Don’t Breathe.  Alex (Dylan Minnette), Rocky (Jane Levy), and Money (Daniel Zovatto) are three friends that live in the slums of broken down Detroit who are desperate to get out of that city at any cost. You may not agree with their method of choice as they rob houses that are monitored by Alex’s dad’s security company. One day, they decide to rob the house of the blind man (Stephen Lang) after they hear about settlement money, but that could prove to be the dumbest thing they have done yet. The film also stars Emma Bercovici in her first role as Diddy, Katia Bokor (World War Z) as Ginger, Sergej Onopko (A Good Day To Die Hard) as Trevor, Franciska Töröcsik (Swing) as Cindy, Christian Zagia (El cojunudo) as Raul, and the film was directed by Fede Alvarez (Evil Dead). 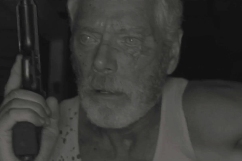 Spoiler Alert: There may be information contained in this Article that could potentially spoil the plot of the film so continue with caution or do not read any further if you do not want to know. Let me just say to all of you out there that this is one intense freaking movie and it’s not your typical horror movie. There’s no supernatural being, monster, or masked serial killer that comes after you. It’s a blind serviceman who uses his sense of hearing to figure out where you are in his house which is just as much of a fortress as the house in The People Under The Stairs (without the freaks). When the hunt is on, it becomes one heck of an intense film that leaves you unknowingly screaming, “you’ve got to be kidding me.” One of my favorite scenes in the film is in the basement when he cuts all of the lights sort of like a welcome to my world bitches. That is one of the most intense sequences and hunts of the film. Then there is some information that you discover towards the end of the film that is just one very disgusting and two kind of twisted. I won’t give that part away, but wait until you see it for yourself. All of the performances in the film were very good and its a relatively small cast as it focuses on the three and the blind man primarily. Stephen Lang is one heck of a twisted and persistent SOB int his film that he is definitely one of my MVP’s of the film with the other going to Jane Levy and Dylan Minnette. I cannot wait for October, but you definitely shouldn’t wait that long to see this film. What are you waiting for, go see it. I am giving the film an A- for a final grade because it was definitely my favorite horror film of the year so far.