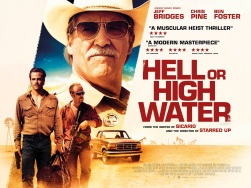 The film I chose for today is one of those films that I just couldn’t miss out on seeing because of how much buzz it has garnered. The name of the film that I chose for today is Hell Or High Water and it stars Chris Pine (Star Trek Into Darkness) and Ben Foster (Lone Survivor). Things haven’t always been easy for Toby Howard (Pine) whose family ranch is about to be foreclosed on by Midland Bank. Along with his brother Tanner (Foster), they decide to go and rob every branch of the bank to try and raise the money to save the ranch. The only problem is that they acquire the attention of a relentless Texas Ranger named Marcus Hamilton (Jeff Bridges) who is close to retiring, but needs this one last hunt. The film also stars Katy Mixon (Eastbound & Bound) as Jenny Ann, Dale Dickey (Iron Man 3) as Elsie, Gil Birmingham (The Twilight Saga: Breaking Dawn-Part 1) as Alberto Parker, Amber Midthunder (Priceless) as Vernon Teller, Buck Taylor (Gunsmoke) as Old Man, Marin Ireland (Homeland) as Debbie Howard, Kevin Rankin (Dawn Of The Planet Of The Apes) as Billy Rayburn, Heidi Sulzman (Laurel Canyon) as Ranger Margaret, and the film was directed by David Mackenzie (Perfect Sense).

As soon as I read that the film was written by the same guy who wrote Sicario (Taylor Sheridan) I can instantly see the similarities in styles and the overall tone of the film. The film is just absolutely tense from beginning to end and it is definitely one heck of a thrill ride. You don’t even have to question the acting in the film because Bridges, Pine, and Foster were just absolutely amazing. I loved how Bridges character is one of those old school Texans who is just an absolute ball buster to his partner. Pine and Foster are a great combination together in the film and they play their roles perfectly. Pine is the quiet, reserved, do right by someone kind of a guy while Foster is definitely the reckless wild man. The writing is so good in this film that they create tension through the dialogue which is not an easy task as we’ve seen in a lot of films in the past. They also capture two sides of a coin where there are some people that can sympathize with them robbing the banks and those gun toting Texans who want to capture them. One of the other elements of the film that I loved is the cinematography. I’ve been to Texas and there’s a lot of land that could look desolate and desperate to which they do a great job capturing those feelings as you watch the film. There is a reason why this film has a plus 98% rating on Rotten Tomatoes and high 80’s/90’s on other sites. It’s just that damn good and a must see for any real cinema fan. I am going to give the film an A for a final grade.