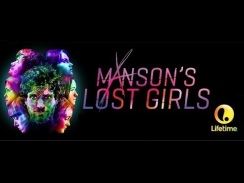 When it became time to pick a movie at Redbox to watch for today, I didn’t realize that the film I chose for today was a Lifetime movie. We have seen countless stories surrounding the topic of Charles Manson and his girls, but for some reason Manson’s Lost Girls looked like a different look inside. Linda Kasabian (Mackenzie Mauzy) is a girl that is just looking for her place in society that she runs away from home. Feeling a little unwanted by her husband, she gets wooed away from the life she lives by one of the Manson girls. It is there that she begins to feel wanted for the first time by people she feels gets who she is, but things soon change. The girls and Manson soon become violent and as history has it they do some things that scare Linda away. The film also stars Eden Brolin (X) as Susan Atkins, Grace Victoria Cox (Under The Dome) as Lynette ‘Squeaky’ Fromme, Greer Grammer (Awkward) as Leslie Van Houten, Isabel Shill (The Following) as Patricia Krenwinkel, Christian Madsen (Divergent) as Tex Watson, Garrett Coffey (Hard Sell) as Bobby Beausoleil, Jeff Ward (Vamperifica) as Charles Manson, and the film was directed by Leslie Libman (Brave New World).

I am not a huge fan of Lifetime movies only because they all follow the same formula usually, but this wasn’t half bad. It doesn’t really give you any information that we didn’t already know, but it gives you a different perspective. The film just really continues the idea of how powerful of a manipulator that Charles Manson was and how he was able to brainwash people. He was a bonafide conman that took advantage of people that were outsiders in the world or at least they felt that way. The acting was pretty decent, but I have to be honest in saying that I was not impressed with their choice of actor for Charles Manson only because he didn’t look like him at all. I’m not saying that he wasn’t an impressive actor because he definitely played the role of a guy who easily able to manipulate anyone. It’s a Lifetime movie after all like I said so there isn’t a lot to expect out of these films. Some scenes in the timeline just didn’t make sense to me because Linda runs away, but then after a while she is just back with them. They didn’t explain how or when she came back. Other than that, it wasn’t half bad like I said so I am going to give the film an B- for a final grade.