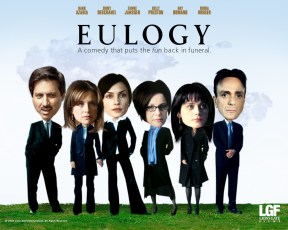 For today’s film, I only have one question to ask all of you and it’s are you ready to meet one of the most dysfunctional families ever? The film is called Eulogy and it stars Zooey Deschanel ((500) Days Of Summer) as Kate Collins, a girl who is supposed to give a eulogy at her grandfather’s funeral. The only problem is that she doesn’t know what to say and looks to her father (Hank Azaria), a failed actor turned pornstar and his dysfunctional siblings which include a lesbian, an overbearing bitch, and a sleazeball for some memories of the old man which turns out to be a project. Oh not to mention that she has to help prevent her grandmother from committing suicide in this black comedy. The film stars Debra Winger (Urban Cowboy) as Alice Collins, Ray Romano (Everybody Loves Raymond) as Skip Collins, Kelly Preston (Twins) as Lucy Collins, Rip Torn (Men In Black) as Edmund Collins, Piper Laurie (Carrie) as Charlotte Collins, Famke Janssen (X-Men) as Judy, Glenne Headly (Don Jon) as Samantha, Jesse Bradford (Romeo + Juliet) as Ryan, and the film was directed by Michael Clancy.

I have found in the past that some black comedies can be a little hard to digest only because you are trying to find the humor in the film. I think since I have grown up so much and found how crappy life can be, it’s easier to find it now when your cynical. I thought that I have seen some real dysfunctional families in my time, but nothing tops the Collins family who are in for the biggest surprise towards the end. If you like character driven movies, I think this is a great film for characters because everyone in the film is just so darn unique and the personalities of some while typical are just as interesting too. I was watching this film and I did not realize that Debra Winger was in the movie the whole time. She does an amazing job playing the overbearing, hypocritical, controlling sister while the always beautiful Kelly Preston just looks amazing as she plays the lesbian sister. Ray Romano plays your prototypical bonehead, disgustingly perverted, can’t handle feelings kind of guy. Famke Janssen’s character is very witty as she has to be as the controversial soon to be wife of Kelly Preston in the film. Don’t think by all that that Zooey’s character is the only normal one in the film because she has issues of her own as well. The movie has it all from your drama filled subplots that unfold before your very eyes to those moments that you just laugh with. I honestly had never heard of this film, but I am glad that I caught it on HBO when I did. I am going to give this film an B+ for a final grade.

For today’s film, I decided to review a film that starred Robert Downey Jr. who made a resurgence in his career in the 2000’s and Anton Yelchin who starred in a film I loved called Alpha Dog. The film I chose for today is called Charlie Bartlett and Yelchin plays the title character. Charlie is a kid who is just looking to fit in, but unfortunately he doesn’t know how to do it the right way as he has found himself getting kicked out of numerous schools. His clueless mother (Hope Davis) decides to enroll Charlie into Western Summit High, where Charlie will become the school’s psychiatrist in order to gain popularity. The only problem is that there are consequences for every action and Charlie has to try and use his new found popularity to do the right things. The film also stars Kat Dennings (Thor: Dark World) as Susan, Robert Downey Jr. (Iron Man) as Principal Gardner, Tyler Hilton (Walk The Line) as Murphy, Mark Rendall (30 Days Of Night) as Kip, Dylan Taylor (Tideland) as Len Arbuckle, Megan Park (The Secret Life Of The American Teenager) as Whitney, Jake Epstein (Degrassi: The Next Generation) as Dustin, Derek McGrath (Carrie) as Superintendent Sedgwick, Jonathan Malen (Mean Girls) as Jordan, and the film was directed by Jon Poll (Captain America 1990).

You can look at this film in several different ways, is it social commentary on how obsessive our society has been on abusing prescription pain killers? Or is it commentary on how kids will do anything to become popular? Well, if it’s the second one, then that is something that has been happening for ages and even in film. Every generation has their films on what it’s like to be a teenager like what Fast Times At Ridgemont High did for the 80’s. I highly doubt that it was the first one just because the pills are a minor part of the whole film and only serve as a catalyst to get the film going. Although, there is this one line in the film that I thought was superb and exactly how society should look at teens and prescription drugs. It reads like, “Bringing psychiatric drugs and teenagers together is like opening a lemonade stand in the desert.” I thought that was a brilliant piece of writing from the writers. Everything about this film was good from the writing to the director and it’s sort of a coming of age story, but only in the fact that Charlie comes to realize who he really is and what his place is in society. Kat Dennings of course looks fantastic in the film and she does an amazing job playing a teenager with so much angst. Listen check out the film for yourself, it’s playing on one of the premium channels. I am going to give the film an B+ for a final grade.