So, you have survived being on an island that was full of Dinosaurs like the T-Rex that could kill you. What is the one thing that you definitely do not want to see or hear about again? Well, I can guarantee that it’s not about another island full of Dinosaurs which is exactly the problem in The Lost World: Jurassic Park. Mr. Hammond (Richard Attenborough) is sick and is about to lose his company to his snot nosed nephew Peter Ludlow (Arliss Howard).  So, he contacts Malcolm (Jeff Goldblum) in hopes that he can go to an island that also contained Dinosaurs called The Lost World before his nephew does.  Unfortunately, they both arrive at the same time with the nephew coming with some big game hunters, but it ends up turning into a rescue mission. The film also stars Julianne Moore (Boogie Nights) as Sarah, Vince Vaughn (Old School) as Nick, Pete Postlethwaite (The Town) as Roland Tembo, Peter Stormare (22 Jump Street) as Dieter, Richard Schiff (Man Of Steel) as Eddie, Thomas F. Duffy (Independence Day) as Dr. Robert Burke, Thomas Rosales Jr. (No Country For Old Men) as Carter, Camilla Belle (10,000 BC) as Cathy Bowman, and the film was one again directed by Stephen Spielberg.

It is always tough to repeat the success or the magic of a first film when you are planning to do a sequel. There is the mentality that sequels are never better than the first films and I would say that is true with this one. While I actually really liked the film, I didn’t think that it was better than Jurassic Park. The film had it’s cool moments with the Velociraptors in the compound, but the sequence in Jurassic Park with them is better and scarier. The only thing I will give this film credit for is that they made the T-Rex’s a little more bad ass and they actually eat humans in this one. I just thought that this film was a little more cartoonish at times if that makes sense at all to anyone whereas the first film was very serious. Jeff Goldblum was well Jeff Goldblum so what more could you ask for from that. I have to say that I didn’t know that Vince Vaughn was in this film and I was very impressed with his performance because he just nailed it perfectly. The late Pete Postlethwaite was just absolutely amazing as the big game hunter excited about his new game that he is hunting who kind of has a change of heart as the film goes on or at least he reassess what he wants to do. This was a decent sequel for a great franchise and all I have to do is watch one more film and I am caught up. For a final grade, I am going to give this one an A-. Check it out on Netflix right now as we speak. 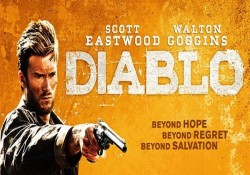 For today’s film, I chose to watch a western because of the love my father has for the original American folklore that is Westerns. Not to mention that the film stars Scott Eastwood (Fury) who is the son of legendary Western actor Clint Eastwood. Eastwood plays Civil War vet Jackson, a man with a lot of skeletons in his closet. Nevertheless, he is sent on a crazy journey as his wife was kidnapped by Mexicans so it is up to him to try and save her before it’s too late. Although, the journey to save his wife is going to prove to be more dangerous than he expected. The film also stars Walton Goggins (House Of 1000 Corpses) as Ezra, Camilla Belle (The Lost World: Jurassic Park) as Alexsandra, Adam Beach (Joe Dirt 2: Beautiful Loser) as Nakoma, Samuel Marty (Fargo) as Ishani, José Zúñiga (CSI: Crime Scene Investigation) as Guillermo, Tzi Ma (The Lady Killers) as Quok Mi, Joaquim de Almeida (Clear And Present Danger) as Arturo, Danny Glover (Lethal Weapon) as Benjamin Carver, Greg Lawson (The Legend Of Butch And Sundance) as Timothy, Yaniv Bercovitz (Rude Boy-The Movie) as Jeremiah, and the film was directed by Lawrence Roeck (The Forger).

I wanted to go into the film thinking that it was going to be one heck of a western only because of who Scott Eastwood’s father was. The sad fact is that no one will ever be Clint Eastwood again in the world of Westerns. Now by me saying that doesn’t necessarily mean that I hated the movie, it’s quite the contrary. I call it the tale of two different films and what I mean by that is that the first half of the film is actually quite boring and a little confusing. They go through scenes without really explaining much and characters all of sudden disappear and such. The second half of the film is when it gets really good because your perception of Scott Eastwood’s character drastically changes and he becomes more bad ass than before. Walter Goggins plays a very vital role in this film especially when it has to do with Eastwood’s character and all will be revealed when you watch the film for yourself. Goggins does a terrific job in the film playing what you believe to be the antagonist of the film until the film goes all Fight Club on us. And I don’t mean soap bars, fights, and Brad Pitt when I say that, but you’ll see what I mean. Like I said, if you’re expecting cool lines and action like a Clint Eastwood Spaghetti Western then turn around now, but you’ll have to want to watch the whole film to get to the good parts. I thought it was an OK film which is why I am going to give the film an B-/C+ for a final grade. It’s borderline between the two grades.