I am going to give you the spoiler alert warning right from the beginning because the film I about to review is too amazing that I may spill some details. Spoiler Alert: There is going to be some information leaked in this article that could give away some details or all the details in the film. So either proceed with caution or do not read any further, but you were warned. From the minute that it was announced that Hugh Jackman (X-Men) was going to star in his very last X-Men/Wolverine related film ever I had to see it for myself. Jackman stars in Logan, a film that looks at a much older Wolverine than we are used to in a very different world. There are hardly any mutants left on Earth after many of them were killed. Logan goes by a different name to disguise himself amongst the non mutants of society. All of that is put to risk when a young girl who is believed to be a new mutant shows up at his compound on the border of Mexico. Now Wolverine has to gather up Professor Xavier (Patrick Stewart) and the little girl named Laura (Dafne Keen) before the dark forces catch up to her. The film also stars Boyd Holbrook (Milk) as Pierce, Stephen Merchant (Tooth Fairy) as Caliban, Richard E. Grant (Bram Stoker’s Dracula) as Dr. Rice, Eriq La Salle (Coming To America) as Will Munson, and the film was directed by James Mangold (Walk The Line).

There is so much to praise about this film that I do not know where to start. The story is absolutely captivating as we are introduced to Weapon X-23 (Laura) who is basically Logan’s daughter because of how she was made. We see this guy who has never known how to love because of the fact that he feels that everything he loves dies. Then the girl comes along and she challenges all of that throughout the whole film. He also has to deal with a very sick Charles Xavier who by the way is a weapon of mass destruction because of what his mind can do and I love how they explored that angle in this film. The film has the feel of an X-Men movie without the 100% look of one and that is what I loved about the film. It is stylistically like a Johnny Cash song, it feels very melancholic in tone almost like you know the end is near and you’re on this last ride. The acting was absolutely amazing from everyone and the back and forth dialogue between Stewart and Jackman is absolute gold. You almost feel like they are father and son the way they banter at each other in the film. This may just be the best X-Men movie or Wolverine movie ever made and I know that it’s a bold statement to make, but after watching this it’s true. The script was amazing, the acting was amazing, the cinematography was amazing,  the soundtrack to the film was amazing, so what more could you possibly want from the film? If you do not go out and see this then you don’t know what you are missing. Make sure you get to the theater on time because there is something special from someone in the beginning that is hilarious. I am giving the film an A+ for a final grade.

Society has always had the need and the want or desire to play God throughout history of cinema (e.g. Frankenstein, Ex Machina). Of course like all of them, they are usually destined to be doomed. So for today’s film, I chose to watch the newest film in Artificial Intelligence entitled Morgan. Morgan (Anya Taylor Joy) is a new breed of artificial intelligence kind of humanoid that was breed as an organism by scientists as an experiment. One afternoon, Morgan has sort of a metal lapse and she attacks a scientist. The corporate company that is paying for the experiment decides that it wants to send in a risk-management consultant by the name of Lee Weathers (Kate Mara). Lee must decide whether Morgan is a valued asset or to terminate a dangerous asset. The film also stars Rose Leslie (The Last Witch Hunter) as Dr. Amy Menser, Michael Yare (Game Of Thrones) as Ted, Toby Jones (Captain America: The Winter Soldier) as Dr. Simon Ziegler, Chris Sullivan (Stranger Things) as Darren, Boyd Holbrook (Gone Girl) as Skip, Vinette Robinson (Sherlock) as Brenda, Michelle Yeoh (Crouching Tiger, Hidden Dragon) as Dr. Cheng, Jennifer Jason Leigh (The Hateful Eight) as Kathy, and the film was directed by Luke Scott (Loom).

The idea for the film was there and for the most part they did a fine job, but maybe the execution didn’t go off as planned. The first part of the film is kind of boring as it’s getting you up to speed with what is going on and exactly who Morgan is. The real excitement in my opinion is when Paul Giamatti shows up to test Morgan as to whether she is an asset for the company or not. That is when the intensity of the film really starts to build up because for a while all you get are pieces of a secret until that secret is finally revealed to you as to why she was locked in the box again. Giamatti is really just there to mess with her mind and prove that she in fact is not human and therefore is not capable of feeling real emotions. He is a ball buster and the only one who is going against science. I didn’t recognize Anna Taylor Joy until I saw that she was in the film The Witch. She was phenomenal in that film and she did a pretty good job in this one as well. One thing that I will say is that she was kind of freaky looking to me which might have been a very small aspect for what they were going for. The one thing I didn’t understand was what was the point of the character of Skip? He really doesn’t serve a real purpose in the film, but he’s just there. There’s a big twist at the end of the film, but if you do the math you’ll figure it out as soon as it happens. I saw the ending coming as soon as it started to unfold which doesn’t bother me too much, but they could have done better with that. Overall, it’s just an OK film that was looking to explore a different aspect of A.I. in cinema. I commend them for that, but it won’t change my grade this time. I am going to give the film an C+ for a final grade. 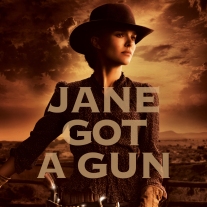 There are times when you have too many movies to watch that you miss one at the cinema every now and again. Today’s film, Jane Got A Gun is certainly an example of a film that didn’t last long at the box office and I missed my chance to see it then. Jane (Natalie Portman) is trying to live her life like any normal woman in post civil war New Mexico with her husband and daughter. Things get very complicated for Jane when her husband returns home with several gunshot wounds from a past that has finally caught up to them. In order to protect her injured husband and make a stand, Jane will enlist the help of an ex-lover (Joel Edgerton) to help against the man bringing all the havoc. The film also stars Ewan McGregor (Trainspotting) as John Bishop, Noah Emmerich (The Truman Show) as Bill Hammond, Boyd Holbrook (A Walk Among The Tombstones) as Vic Owen, Rodrigo Santoro (300: Rise Of An Empire) as Fitchum, James Burnett (Maze Runner: The Scorch Trails) as Cunny Charlie, Sam Quinn (Transcendence) as Slow Jeremiah, Alex Manette (Lee Daniels The Butler) as Buck, Jenny Gabrielle (Employee Of The Month) as Whore, and the film was directed by Gavin O’Connor (Pride And Glory).

I want to start this off by saying that Joel Edgerton is becoming one of my favorite actors in Hollywood. I have yet to be disappointed by anything that he has put out whether it was a film he strictly starred in or had something to do with the story, etc. Joel Edgerton was one of the screenwriters for this film and I have to say that it’s kind of an unorthodox western in which the back story is being told while the story is unfolding. One thing that I thought was cool was that I had no idea that Ewan McGregor was in the film and he is the antagonist of the film. He does such a great job playing the villain in the film and in fact I thought everyone from Portman to even a person with a minor role did a fantastic job. The last western I watched didn’t make the top 25, but this one definitely has a chance because I liked everything about it. The difference between westerns today versus the days of Eastwood and such is that the kills look a lot more realistic with the abilities we have now. The story structures and the subplots are all the same as they were before, but now they get a little more creative. To make the story even more of a happy ending, they throw a little twist at the end that was a little lame (I’ll admit), but it didn’t bother me at all. The film is available at Redbox now so if you love westerns then give this one a chance. I am going to give the film an B for a final grade.