For the past 7 years, the cases of Ed and Lorraine Warren have become all the rage with films like The Conjuring and it’s sequel, Annabelle, and all the rumored sequels that are all following. The one that started the craze A Haunting In Connecticut is our featured film for today. Matt Campbell (Kyle Gallner) has cancer and has to go through treatments in Connecticut and Sarah Campbell (Virginia Madsen) is willing to go through any lengths for her son. So as a way to make it easier for him, she decides to move the family temporarily into a house that is close to the treatment center. What they don’t realize is the house has a pretty evil history and whatever spirits that are in the house are about to haunt the family. The film also stars Elias Koteas (Teenage Mutant Ninja Turtles II: The Secret Of The Ooze) as Rev. Popescu, Amanda Crew (Sex Drive) as Wendy, Martin Donovan (The Opposite Of Sex) as Peter Campbell, Sophi Knight (How To Plan An Orgy In A Small Town) as Mary, Ty Wood (Maneater) as Billy Campbell, Erik J. Berg (Silent Night) as Jonah, John Bluethner (The Lookout) as Ramsey Aikman, and the film was directed by Peter Cornwell (Ward 13). To see the rest of the review, please click here to go to Moshpits and Movies.

In this decade alone, Ed and Lorraine Warren have become figures of the supernatural with films made based on their case files like The Conjuring, A Haunting In Connecticut, and Annabelle. So, it’s safe to say that I was super excited to see that The Conjuring 2 was coming out and hence why I chose it for today’s film. In this film, it’s 1977 and Ed (Patrick Wilson) and Lorraine (Vera Farmiga) have been on a sabbatical since the events at the Amityville house. They get pulled out of that sabbatical when a strange case comes to them all the way from Enfield, London, England. Things are tough for Peggy Hodgson (Frances O’Connor) and her kids as they struggle to get by. Things ill start to get worse when it seems that her youngest daughter Janet (Madison Wolfe) starts to become possessed. The Warrens now have to fly out there to figure out if it’s true or if the girl is faking it. Can they help her or will they leave? The film also stars Lauren Esposito as Margaret Hodgson, Benjamin Haigh (The People Next Door) as Billy Hodgson, Simon McBurney (Body Of Lies) as Maurice Grosse, Franka Potente (Blow) as Anita Gregory, Bob Adrian (Twelve Monkeys) as Bill Wilkins, and the film was directed by James Wan (The Conjuring). 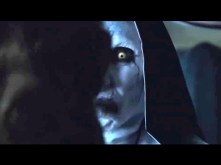 We all know that sometimes horror sequels are never really that good and we usually leave the theaters disappointed. While I still hold the first film in high regards, I really thought that this was a very good film that was just so spooky at times. There were those cheap scares, but they definitely scared me a couple of times. The demon int he film is just spooky as hell and is enough to really give you the creeps. I love how they started out the film at the Amityville house because they sort of explain what Lorraine felt when she was going through the house. I loved the soundtrack to the film which featured a lot of great music from the late 70’s, but I also loved the score to the film. The score to the film was so creepy that it made it worse for you as you waited for something to happen. While some things that the evil spirits did were a little predictable at times, it didn’t bother me because in my opinion this is the best horror film of 2016 so far. What makes it even more scary is that it’s true and it’s from their case files. Stick around to the end of the film because you get a special treat where you actually get to hear the real voice of the evil spirit that they recorded during their visit plus you get to see real pics from the experience. The evil nun in the pic you see was a great antagonist for Lorraine as it puts her faith to the test throughout the whole film. I would definitely recommend this film to anyone who is a fan of horror and these types of cases. I am going to give the film an A- for a final grade.