I didn’t get to watch the whole special because I couldn’t get a feed where I was, but I caught the last half hour which is essentially all you needed to see last night especially the ending. It was that time of the show where it was time to reveal the winner of Best Picture and Faye Dunaway and Warren Beatty were presenting the award. When Beatty was about to read the winner, he seemed very confused so he would occasionally stop so Faye had to read the card and she announced La La Land as the winner of best picture. So, the whole entire crew came on stage and were giving their speech when it was revealed by the film’s producer Jordan Horowitz and Warren Beatty that there was an epic mistake. Jordan would reveal that the real winner of the award went to Moonlight and he waited on stage so that he could personally give them the award. That right there my friends is a very embarrassing moment for the Oscars and one that almost gets Steve Harvey off the hook for his epic blunder. There were a lot of surprises that night including that one because I thought for sure that La La Land was going to clean house. I knew that Casey Affleck was going to win Best Actor, but I thought that Dev Patel was going to win best supporting.

Out of 14 nominations which tied a record, the film La La Land only took home six total awards which is less than what I predicted (I predicted nine). One of the definite surprises of the night is that now you have to call Suicide Squad a Oscar winning film even though it was for best make up and hairstyling. Out of all the surprises and all the mayhem that ensued, the awards show definitely makes me want to watch Moonlight to see what they saw in the film which took home three golden statues that night. A lot of the films I predicted were second choices and if I had gone with my first choice, I would’ve done a lot better, but I listened to the hype. So, out of 24 possible awards, I only correctly predicted 11 of them which is 46% and that is a failing grade. Here are all the winners from the night:

Best Costume Design- Fantastic Beasts and Where To Find Them

Tonight is the 89TH Academy Awards a.k.a. the Oscars and the buzz around the land is with the musical La La Land which has garnered the most nominations with 14 overall. The question going into the night is whether that film really deserves all the nods and if it deserves any wins. One film in my opinion that deserves a win is the film Lion which was directed by Garth Davis and stars Dev Patel in this heart wrenching story of a 5 year old boy from India who is separated from his family only to be adopted by an Australian family and when he becomes a man he searches for his original family. It was such an amazing story and film that truly tugs on the heartstrings. Then there are films like Fences which was directed and stars Denzel Washington, the suspenseful Sci-Fi film Arrival, an amazing tale of a man who goes to war without a gun in the Mel Gibson directed Hacksaw Ridge, to other deserving films like Manchester By The Sea, Hidden Figures, Moonlight, and Hell Or High Water. What I do know is that the films I listed last without description will not win while Mel Gibson will be snubbed due to his past and I just can’t see Arrival winning. So, the award will come down to Lion, La La Land, and Fences.

I do think that Casey Affleck has a big chance to win best Actor in a Leading Role and his only competition in my mind will come from Denzel Washington (Fences). I am not taking anything away from Andrew Garfield (Hacksaw Ridge), Viggo Mortensen (Captain Fantastic), or Ryan Gosling (La La Land), but they don’t stand a chance. Meryl Streep will be looking for her third Oscar win a she is nominated for Best Actress in a Leading Role, but she has tough competition from in my opinion Emma Stone (La La Land), and Natalie Portman (Jackie). If I had never seen Lion, I would have given the Best Supporting Actor award to either Michael Shannon (Nocturnal Animals) or Jeff Bridges (Hell Or High Water), but Dev Patel (Lion) could be a shoe in, but don’t count out Mahershala Ali (Moonight) either. One of the only categories I am completely unsure of is the Best Supporting Actress award which sees Michelle Williams (Manchester By The Sea), Viola Davis (Fences), Naomie Harris (Moonlight), Nicole Kidman (Lion), and Octavia Spencer (Hidden Figures) all up for the award and each one is just as deserving as the next one. Out of all the Best Animated features, the only one I have seen is Zootopia, but somehow I think that Moana could be the serious contender.

I just feel that the rest of the awards are going to get cleaned up by La La Land like best director, cinematography, costume, film editing, music (Original Score and Original Song), Sound editing and Mixing, etc. The only problem with the awards is that I haven’t seen any of the foreign films, documentaries, and shorts. I feel I can’t really form an opinion about them, but I’ll try my best when it comes to predictions. One film that I feel deserves to win an Oscar is Doctor Strange for best visual effects because it had some amazing effects, but Rogue One: A Star Wars Story could prove to be a worthy adversary. Here are the rest of my predictions for the show:

If you noticed in the last couple of weeks, we have been doing a new segment called Tuesday Night Fights which we have listed under Ass Whoopin Wednesdays. Witht hat being said, we haven’t forgotten about the actual Ass Whoopin Wednesdays, we have just been waiting for the right film to come along. For this week’s edition of Ass Whoopin Wednesdays, we are watching Jack Reacher: Never Go Back. In this film, we see Jack Reacher (Tom Cruise) return to DC to meet a Major Turner (Cobie Smulders) to take her out on a date, but there is a problem. She has been arrested for treason and he is being charged with murdering her lawyer and he found out that he is possibly a dad. So, he breaks her out of jail to try and get to the bottom of the problem before they are both toast, but this…

All this talk going around the internet about 2020 and the new King Kong vs Godzilla film which may get some attention as the special scene in the upcoming Kong: Skull Island has me wanting the match now. Then I realized that they did face each other before and it was all the way back in 1962 which was 55 years ago. In the original version, an American submarine travelling around in the ocean sees something nuclear inside of an a gigantic glacier. When they go in to investigate it, they by accidentally unleash the most fearless monster of all in Godzilla. Jealous that one station reported on the findings, Mr. Tako (Ichirō Arishima) sends two of his best men to the mysterious Faro Island to discover whether there is a monster on that island or not. When a giant Octopus comes ashore and attacks the island, the two men Sakurai… 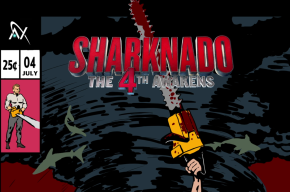 It seems to be a tradition every year now on the SYFY channel when a Sharknado movie comes around and it seems to be something we cover for Cheeseball Cinema too. It’s also been a while since the last time we covered a Cheeseball Cinema film so to get us back in the swing of things, we decided to watch Sharknado 4: The 4TH Awakens. To get you up to speed, it has been five years since the last Sharknado attacks and Finn (Ian Ziering) has been living the quite life with his mother (Cheryl Tiegs) and his son Gill (Chris and Nicholas Stone), but no April (Tara Reid). Finn believes that she has passed away after being in a coma for four years, but is surprised to see her when a new Sharknado of sorts decides to touch down in Las Vegas. As it morphs into all different…