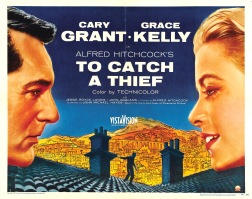 After today there are only 20 more days to watch 20 more films which also means that there are only two Sundays left in the whole year. So for today’s Sunday At The Classics, I chose to watch a film from the master of suspense in Alfred Hitchcock’s To Catch A Thief which stars Cary Grant (North By Northwest) and the beautiful Grace Kelly (Dial M For Murder). John Robie (Grant) is a long retired jewel thief who is just trying to enjoy his time in France until some jewel robberies start to happen. Immediately, John is to blame, but now he wants to prove his innocence by outsmarting the jewel thief so he tags along with a rich American woman named Frances Stevens (Kelly) and her mother until he can figure out who it really is to clear his name. The film also stars Jessie Royce Landis (North By Northwest) as Jessie Stevens, John Williams (Witness For The Prosecution) as H.H. Hughson, Charles Vanel (The Wages Of Fear) as Bertani, Brigitte Auber (The Man In The Iron Mask) as Danielle Foussard, Jean Martinelli (Rouge et Noir) as Foussard, René Blancard (Main Street) as Commissioner Lepic, and Georgette Anys (Four Bags Full) as Germaine.

Grace Kelly was such a beautiful woman who was also an amazing actress and Cary Grant is no push over either in the acting department. Both Grant and Kelly put on excellent performances for the good ol’ Alfred Hitchcock in this film which is different than what I have usually seen from him, but you can also see the similarities. The film had some amazing cinematography which was probably my favorite part of the film. There were some amazing shots of the area of Cannes that they were in and some of the shots of the villas were amazing too. The car chase scene was pretty decent in the way it was shot, but nothing like I saw last week in Bullitt. The film had a pretty amazing story to go along with it, but when it came to those final moments when were going to find out who the real burglar was, I finally guessed it correctly. The whole film I had no idea who it was going to be, but I figured out where they would come from and you’ll know what I am talking about when you watch it.  If I am looking at the film stylistically scene by scene then one of my favorite departments for the film was the costumes. One of my favorite segments as far as that is concerned was the ball at the end with their Louie XV themed party. The 50’s was definitely an amazing time for clothing and even film. I think any fan of Hitchcock who hasn’t seen this one should definitely give it a shot. I am going to give the film an A for a final grade.