After today there are only 3 Sundays left in the whole entire year which means I am coming close to achieving my goal and it also means there are only three Sundays At The Classics left. The film I chose for today is one that I couldn’t resist watching considering that it’s Christmas Season and I am talking about It’s A Wonderful Life. George Bailey (James Stewart) is someone who has always put others before himself, but he is also a guy who has had big dreams of doing things like travelling the world. Unfortunately for George, he has never been able to do it because he has put others including is father’s struggling business the Building & Loans ahead of his wants. One day a large sum of money goes missing and George doesn’t know what to do, but when he thinks of something bad, God sends him a Guardian Angel who is still trying to earn his wings to try and save him. The film also stars Donna Reed (From Here To Eternity) as Mary, Lionel Barrymore (Key Largo) as Mr. Potter, Thomas Mitchell (Gone With The Wind) as Uncle Billy, Henry Travers (The Invisible Man) as Clarence, Gloria Hallward (Oklahoma) as Violet, Ward Bond (The Maltese Falcon) as Bert, Frank Faylen (Funny Girl) as Ernie, and the film was directed by Frank Capra (Mr. Smith Goes To Washington). 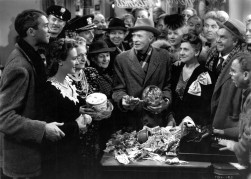 They really were not kidding when they said that this was one of the best films of all time. James Stewart was one of the best actors of all time whether he starred in the Capra films or the Hitchcock films. He was absolutely masterful in the film as the guy who is so full of dreams and wonder that he puts all of it aside to do what is right by people in this town of Bedford Falls. One of my favorite scenes with him in the film is when he wishes that he was never born and the guardian angel Clarence grants it to him. What happens next is absolutely masterful as he goes through the town desperate to convince that it’s all a dream until he realizes that it’s reality. Donna Reed is also fantastic as Mary, his wife in the film and I can’t really complain about anyone because everyone was great. The cinematography was amazing, but there was one scene that I thought was cheesy. There’s this scene where the camera pans up to space. We see what looks like galaxies and it ends up being Joseph and I believe Jesus. They start talking to each other and that’s when they put Clarence on the job, but when they talk flashing bulbs behind the picture signify who is talking. Other than that, this is one of the best films and very inspirational because the moral is to stand up to the man no matter what because they don’t always want what’s best for everyone. Check out the film for yourself, I am going to give it an A+ for a final grade.