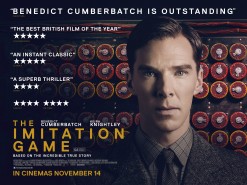 The past couple of days have all been about watching films that I have wanted to see either from my interest or from suggestions from other people. The film I chose for today is also based on a true story and it’s called The Imitation Game. The film stars Benedict Cumberbatch (Star Trek Into Darkness) as the very eccentric and smart mathematician Alan Turing. During World War II, the Germans were sending very hard to break coded messages that was called The Enigma.The British Government was desperate to try and figure out what the messages are so they hired Alan and other mathematicians to try and break the codes by building a machien that can do so. That is not his only issue as the biggest secret he is trying to keep may become exposed and it could ruin everything he has worked for.  The film also stars Keira Knightley (Pride & Prejudice) as Joan Clarke, Matthew Goode (Match Point) as Hugh Alexander, Rory Kinnear (Skyfall) as Det. Nock, Allen Leech (Grand Piano) as John Cairncross, Matthew Beard (Chatroom) as Peter Hilton, Charles Dance (Last Action Hero) as Commander Denniston, Mark Strong (Sherlock Holmes) as Stewart Menzies, James Northcote (Nymphomaniac: Vol. I) as Jack Good, and the film was directed by Morten Tyldum (Buddy).

The movie is listed on IMDB as a thriller and I kind of don’t see that as much as I see drama and biography. I honestly believe that you have to be a fan of either World War II related stuff or a fan of Benedict Cumberbatch (which I am of both) in order to like this movie. Anyways, I didn’t really see too many thrills in the film unless you count them trying to decode messages as thrilling. The one thing you’ll find about this film is that people can be cruel and misunderstanding of those that are different. Alan had to live with a dark secret and was eventually punished in England for it. Now I wanted to look up what was fact or fiction about this film and there seems to be a lot of civil liberties that were taken by the writers of this film. For one, he is not the man who invented the computer like the film suggests, but rather it was invented by Polish men. He was also openly gay according to the site whereas the film has him very secretive about it. To read more fact vs fiction about the film, please click here. Benedict Cumberbatch was masterful as always in the film and so was Keira Knightley which is something I haven’t said too often. I am a huge fan of World War II films, but this one wasn’t exactly my favorite. I did enjoy it, but it does drag a little but for my liking.This is definitely a film for actors because you have to love the ones that are in it. That is why I am going to give the film an A-/B+somewhere in there for a final grade.