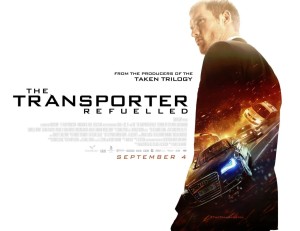 For today’s Ass Whoopin Wednesday film, I had been meaning to check out the reboot. remake, re-imagining, or whatever you want to call it of The Transporter series. The Transporter Refueled was released last year and it was the first film in the franchise to not feature Jason Statham. The film actually stars Ed Skrein (Deadpool) as Frank Martin, the transporter. In this film, Frank takes a job from the beautiful Anna (Loan Chabanol), but what he doesn’t realize is that he is going to be a pawn in her game of revenge on a Russian crime lord in the south of France. When Frank tries to get out of it, they kidnap his father (Ray Stevenson) and use him as bait to get Frank to finish the job. The film also stars Gabriella Wright (Everly) as Gina, Tatiana Pajkovic as Maria, Wenxia Yu as Qiao, Radivoje Bukvic (Taken) as Arkady Karasov, Noémie Lenoir (Rush Hour 3) as Maïssa, Yuri Kolokolnikov (Leningrad) as Yuri, Lenn Kudrjawizki (Jack Ryan: Shadow Recruit) as Leo Imasova, Samir Guesmi (District B13) as Inspector Bectaoui, Anatole Taubman (Captain America: The First Avenger) as Stanislas Turgin, and the film was directed by Camille Delamarre (Brick Mansions). To see the rest of the review of the film and to check out the stats, please click here.