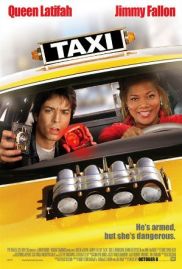 This wasn’t my first choice for a film for today, but I was running out of time and this was on television. For day two of my challenge, I watched the 2004 film Taxi which was directed by Tim Story (Ride Along) and it starred Jimmy Fallon (The Tonight Show) and Queen Latifah (Chicago). Jimmy Fallon plays a New York City cop named Andy who is a little too green for his own good. The man can’t do anything right on the job and he is considered the laughing stock. Queen Latifah plays New York taxi driver Belle who is too into her job as a taxi driver that it’s screwing up things at him with her man. Their paths cross one day when Andy decides to take her cab to chase down some bank robbers who happen to be hot Brazilian supermodels. Despite all the forces against them, they will stop at nothing until they take down the bank robbers. The film also stars Mrs. Tom Brady  Gisele Bundchen as Vanessa, Henry Simmons (Agents Of S.H.I.E.L.D.) as Jesse, Jenifer Esposito (Summer Of Sam) as Lt. Marta Robbins, Ana Cristina de Oliveira (Miami Vice) as Redhead, Ingrid Vandebosch (Going Greek) as Third Robber, Ann-Margaret (Tommy) as Mrs. Washburn, and Christian Kane (Life Or Something Like It) as Agent Mullins.

As I said before, this wasn’t my first choice for a film for today, but at the time it was on and I had to do what I had to do. One of the other reasons why I watched it was for the fact that I do enjoy Jimmy Fallon and what he did on SNL and The Tonight Show, but even those can’t save him from this film. The film has it’s moments where it shows potential, but then it just dwindles away. I understand why they went with four supermodels as bank robbers, but these supermodels took the time to learn how to drive like bad asses in their lifetimes? They did that for the comedy aspect of it, but seriously guys. They wouldn’t have to do much cause I’d let these hot women rob me too. There’s plenty of bad ass driving and action scenes in the film, but it just sort of lacks on the laughs. I thought Queen Latifah actually did a good job flexing her acting abilities on screen, but it just wasn’t enough for me. I was surprised to find out that Tim Story directed the movie because I loved Ride Along. You can definitely see some of the similarities in shots with the two films. The film gets a 10% on Rotten Tomatoes which seems to be just right as far as how good the film was. So, I am going to give the film a C- for a final grade.